Mercury inconjunct Uranus in the chart of Berlusconi 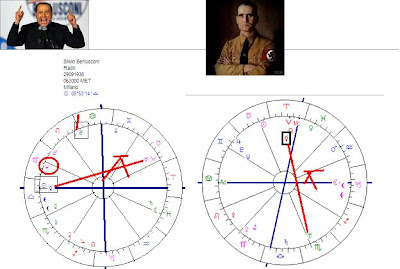 Silvio Berlusconi has Mercury conjunct Ascendant and inconjunct Uranus: a prominent disproportional and outspoken controversial opinion. In 1993 he decided to become a politician and that was in the year that this inconjunction perfected (Progressed Mercury exactly inconjunct progressed Uranus). What he does today is expressing his controversial and provocative opinions on delicate issues. Today he said that the death of a girl whose death body was kept functioning for 17 years, was murder. O yes, I almost forgot: he also has Mercury quintile Pluto for creative power of communications. Pluto and Uranus together with Mercury symbolize the slip of the tongue, the impulsive words. And the strategy (Pluto) to change (Uranus) minds (Mercury). Of course: he is a media giant.

Look at his chart. Neptune is oriental (for a focuss on the immaterial field like religion, media and fantasy), Pluto is elevated and calling! (for the screaming and on top of it all power, money and sex). The Sun is quintile Jupiter and 67.5 (semi square + half semi square) from Pluto. This is the profile for latent success. And watch the prominence of Sun and Mercury on the Ascendant, indicating the brilliant communicator. See how Jupiter is square Neptune, reflecting the theme of the 'audience' and/or religion and how both are square Saturn for the late in life fullfilment of dreams.

Today, transit Jupiter is inconjunct his Midheaven for a disproportional success (in his own eyes) and Saturn and Uranus are in aspect with his progressed Midheaven. And indeed, it is the theme of breaking free that has become a public issue today. A soul has been liberated out of a corps that was kept alive against the will of the owner. And Berlusconi said that the girl could have become a mother still because she had periods. As if a woman is no more than a dead body producing children.

HESS
In my files I found the chart of Rudolf Hess (born April 26, 1894 at 10 LMT in Alexandria) as another example of a prominent Mercury inconjunct Uranus and we know what he did. This nazi flew to Scotland in 1941 with so called peace proposels of Hitler. He was put in jail and died in jail. Mercury inconjunct Uranus: having a difference of opinion, but...having controversial ideas, but...Freedom of speach but...Isn't it interesting that in 1941 he had progressed Mercury trine Uranus, activating the inconjunction in the natal chart? The difference with Berlusconi could not be greater. He had a calling Sun quindecile a crucial Saturn for the prominence of his defeat.

INBAR
Ralph Inbar (born Devcember 24, 1938 at 16hours Local Time in The Hague) was famous because of his hilarious programs on television. He had Mercury inconjunct Uranus. The difference with one Berlusconi is that he had Sun and Jupiter on the angles.

HILARIOUS?
Maybe Mercury inconjunct Uranus is symbolizing hilarious ideas? Hess had them. He gave himself an order a day (like: don't brush your teeth today). Berlusconi has them, too. And sometimes he expresses silly ideas. Of course, this is only my humble opinion (BTW I have Mercury on Sun/Moon opposition Uranus:).