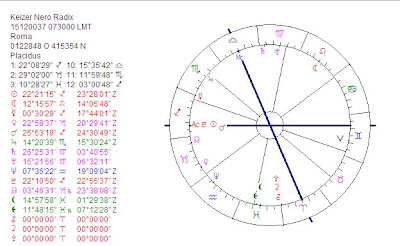 This is the (real or supposed to be) natal chart of Nero. History tells us that he became emperor by murder and that he was responsible for the death of thousands. Eventually, he died by force, too. His natal chart is a good example of how angular placements*) give the right impression at first sight. I used this chart on my Dutch site Astrostudie (as a test) because it is quite clear what kind of a person owns this kind of a chart and what the effect would be in the first century A.D.

Now look at the chart of Nero. How would you describe a male person with these crucial marks, in thAt moment in history and with thAt kind of power? I indicated the special marks in the chart below. 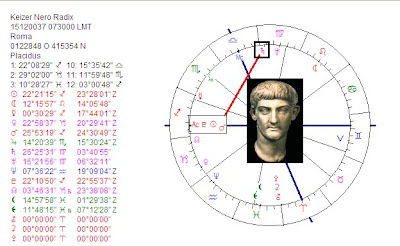 This chart is obviously the chart of a very energetic and aggressive person with ambitions. It is someone who provokes resistance against his methods. Why?
- Mars afflicted; possible aggression (and it were aggressive times in history)
- Pluto afflicted; difficult and complicated (making it easy to be a tyrant in those days)
- Sun afflicted; possibly arrogant (and why not, with absolute power)
- Saturn afflicted; possible end to an ambitious career.
- Mars conjunct Pluto; drive to win (even by force or forcing yourself)
- Mars square Saturn; acts against what is decent (or lawful) or fighting against restrictions
- Sun on Ascendant (drawing attention immediately)
- Sun square Saturn (seeing the bad side of life or lifestyle)

Imagine a character with this position in those days and you can see the picture of an absolute tyrant who will eventually meet stronger enemies. Character and consequences are simply defined by the 4 prominent placements and the 1 square between them. You can see the picture in the blink of an eye. I think the chart of Emperor Nero is exemplary.

BTW: Nero thought of himself as a poet. If you are interested in the artist in the chart of Nero, see Art & Astrology.

*)When you see the natal chart as the astrological passport, the special marks are the angular placements. Ascendant, Midheaven and the positions square Ascendant relate the chart to the precise spot and time on earth. Tight angular positions make the difference between THIS one person and all the others born on that day (or place).