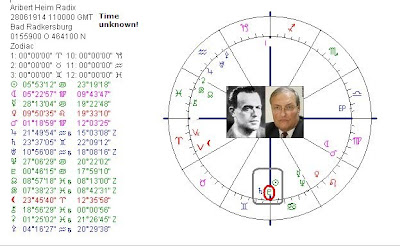 In July 2008 I wrote about Aribert Heim (Dr. Death) when people thought he was still alive. Now they think that he died 20 years ago. Right now Jupiter is trine his progressed Sun and conjunct progressed Uranus. It is the combination of relief and positive change. Well, he would have been very very old if he still lived. He was born in 1914 and would be 94.

I wrote before:
"Aribert Heim, born 28 June 1914 in Bad Radkersburg (still alive today!)was very cruel in Mauthausen. His nick name is Dr. Death. The persons born on his birth day have a focus on issues of money, power, politics and influence (Pluto), are strongly committed to a cause or emotionally involved (water signs) and can easily use or abuse power and strength (Mars sextile Pluto). They are also likely to mix up facts and fantasy (Mercury-Neptune) and tend to be impulsive in their relationships or have a certain artistic ambition (Venus-Uranus). It depends on what planet is crucial in their chart. The symbol of that planet will be crucial in their life. As mr. Heim is called mr. Death, it might be a crucial Pluto. Pluto in his chart is close to Sun and Saturn. The combination of Sun, Saturn and Pluto can make a man unscrupulous, sometimes forces you to disregard signals of danger, and confronts you with the disadvantages of money, politics and power. See my article about Saturn and Pluto… on my site Astromarkt."

On the former post you find more about the progessions at vital moments in his life. Of course, circumstances, genes, opportunities and history influenced his cruel career, but the chart reveals at least the possibility of being unscrupulous. Without hour of birth the angular placements are not known. And little can be said about the question if Aribert Heim is alive or death.

Photograph of Dr Death smoking it up on the Nile, circa 1984