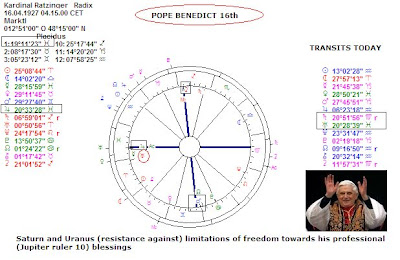 My latest post was about Pluto's influence and now I see that Pope Benedict has progressed Sun conjunct Pluto, exactly on February 4. Queen Juliana had it when she was confronted with politicians who disagreed with her ideas and ended up in a crisis. You can read that post here...

Sun-Pluto is not the only problem to be dealt with. Now what is in the news?

Pope Benedict is appointing bishops and assistant-bishops who are very controversial and politically incorrect, these days. He appointed a controversial bishop who keeps believing that the Holocaust was not that bad at all. He also appointed an assistent-bishop who believes that Harry Potter is a danger.

Of course, let us not forget that the Pope has Saturn elevated. He is conservative above all.*)

SATURN-URANUS
There are even more indications for less pleasant news in the press. Uranus recently was conjunct his Ascendant and Saturn was too. Saturn is in his 9th Placidus house, moving towards Midheaven and linea recta to the progressed IC. It is the picture of (resisting against) limited freedom.

JUPITER-URANUS
In his natal chart Uranus is oriental (rising before the Sun) and Jupiter is angular. He is rather independent and 'special' (maybe even getting very old) because of Uranus, but also controversial. Jupiter's place tells us that he is an international (yes, a German in Italy) and that he may look wise. Now notice that transit Uranus is conjunct his prominent Jupiter. And Jupiter and Uranus are on top of his progressed chart! In the solar return (birthday chart) of 2008 Uranus is oriental and Jupiter is square Ascendant. Three times Jupiter-Uranus and Jupiter and Uranus prominent in the natal chart...That tells us that there is an important sort of a relief and a renewal of confidence. And yes, who can stop him from appointing controversial bishops? Nobody.

PROGRESSED SUN-PLUTO
Nobody is able to stop his appointments. Except politics, perhaps. And that is why we see progressed Sun conjunct Pluto for the challenge and the enemies and for the resistance that will grow, in spite of nice Jupiter's transits. A resistance that will produce stress, for example. Sun-Pluto progressions make life and life style more intense than ever. I wonder if there are health problems, especially because in his next solar return Pluto will be conjunct the Ascendant and Venus (ruler 8th equal house) in the natal chart is square ASCendant, at the bottom of the solar return chart. It might be a difficult new year.

UPCOMING SATURN
Perhaps he is in a rush to appoint conservatives, because he feels the pressure of time, more than he did before, with the upcoming transits of Saturn. With Sun conjunct Pluto there is always a danger of asking too many of the body or ... of the others. Life with difficulties and challenges, that is what Sun-Pluto is about. And sometimes there are too many problems at the time. It seems like there are in the Roman Catholic Church today.

*) Most elevated is dwarf planet Ceres (the mother figure, symbol of nurture and nature - origins- , seed, heirdoom, genes, roots and all that is basic). Ceres might of course also refer to Maria, mother of God in the Catholic religion.

When the Pope fell (Saturn square his Saturn