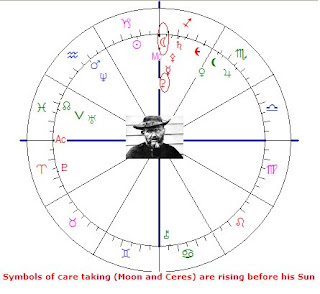 This year the progressive sun sign of Blessed Father Damien changes sign. This is reflecting the change in 'being'. He will be a saint on October 11, 2009. Father Damien is 'blessed' since 4 June 1995 (when his progressed Sun was opposition Saturn). He was born as Jozef de Veuster on 3 January 1940 in Tremelo (Belgium) and went to Honolulu in 1863. There he took care of people with leprosy. Now he will also be the saint for those who suffer from aids.
Greatest person of Belgium/becoming a Saint
On 2 december 2005 Father Damien was proclaimed the Greatest Belgian ever. That was with Transit Saturn semi square Sun and progressed Sun sesquisquare Neptune.
In September 2007 the procedure to become a saint started. That was when transit Pluto was conjunct his progressed Sun and with progressed Sun sesquisquare Jupiter. Jupiter, Pluto and Sun together reflect success.
CERES AND MOON
Ceres and the Moon are symbols of nutrition and care and that is what Father Damien did in Honolulu. Ceres and the Moon are prominent in his chart. They are rising before his natal Sun.
More info:
http://en.wikipedia.org/wiki/Father_Damien