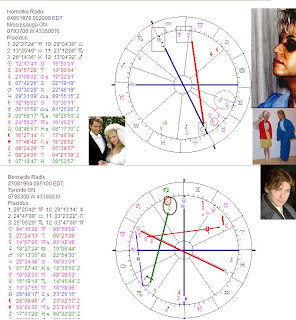 They had a nice nick name but were not nice at all: Karla Homolka and Paul Bernardo. They were a good looking couple that murdered young girls for pleasure. Karla even poisoned her own sister wit Halcion (and said the fact that she died was an accident). The intention was to present her sister as a gift to her lover.
What kind of charts do the Ken and Barbie murderers have? In short: they shared Moon-Pluto and Venus-Mars.

Karla HomolkaKarla Homolka was born 4 May 1970 in Mississauga, Canada. She has the combination of dramatic change (often an arrest), Uranus and Pluto, on top of her chart. Jupiter on Midheaven represents progress and prosperity in a degree that Janduz interpreted as a degree of ‘lack of judgement’.


Paul BernardoSee the interview on You Tube


Paul Bernardo was born 27 Augustus 1964 at 8:51 in Toronto. Passion comes first in his chart. And as there are no placements in air signs sometimes you just cannot reason with this man*) He has Venus trine Neptune, Neptune on Asc/MC. It is easy for a man with Venus trine Neptune to seduce women and Neptune’s crucial position refers to art or fantasy as an important issue. Another observation to make is the Moon sesquisquare Pluto.


MOON PLUTO
There is a tight inconjunction of the angular Moon and Pluto in the chart of Karla Homolka. Her partner has Moon sesquisquare Pluto. Both have an aspect between Moon and Pluto. Sharing Moon-Pluto aspects in a relationship means (see Astromarkt):


Moon in aspect with Pluto shared, is a challenge for daily life. Two little tyrants wanting to have it their way, to eat their favorite food! But they are a closed front when in trouble. A bit like the Bundies! If one of the two has a soft and easy aspect for this person it is a lot easier to have it his or her way then for the one with the hard aspect. The result of that is that the other person shows a lot of anger.

So they shared intense needs (reflected by Moon-Pluto) and in Karla’s chart there is a disproportional price to pay for the experience.


In Dutch astrologer Martin Boot’s book ‘Van Ram tot Vissen’ the inconjunction of Moon and Pluto is referred to as ‘seeing submission as a a way to express love’. Moon rules the 7th house of partners, Pluto rules Midheaven (position in life). The tightest aspect in her chart shows what probably will be the most intense experience in her life. The Moon inconjunct Pluto also shows the disproportional intensity of her needs. Her Moon is 112.5 degrees (square + half semi square) from the Ascendant, reflecting the chance of to be considered abnormal behaviour.

PASSION
There is another thing they shared: Venus conjunct Mars (passion). Now we already see a pattern of extreme passionate needs. It drove them to crime. Notice that the Moon is in Aries and that is rather selfish sign (me first! My needs are the most important of them all), of course in particular when there are afflictions and when the Moon is in bad aspect with the Ascendant (for difficulties in ‘behaving’). The Moon symbolizes psychological effects. The outside world (Ascendant) did not accept (affliction) this kind of behaviour (Moon) in the end.


SYNASTRY
They found each other because they had the same kind of needs. Their Moons are in Aries (conjunction within 3 degrees) and both afflicted by Pluto.

I think this Moon-Pluto connection between the two and in his chart is of vital importance.
The intensity of their needs together with the passion they had, the submission of Karla and the talent to ‘romance’ women of Paul lead to a dangerous combination. He sort of made her his slave and his influence on her life is reflected by his Pluto trine her Sun.

When he started to beat her up (his Mars-Uranus septile, his Uranus square her Mars), she turned him in. Her Uranus and Pluto on top are on either side of his Ascendant and so she dramatically changed his circumstances and her own position.

The second one had Mars conjunct Saturn and biquintile Pluto with Venus inconjunct Pluto. Perhaps they were taking (sexual) risks that caused their early death. Of course, not everybody with these kind of aspects suffers the same death. But it is strange that both victims had these aspects.


PS
Paul Bernardo has Sun in 12 opposition Saturn. More than once a twelfth house position of Sun or Saturn with an affliction between the two (and Uranus related to it) refers to imprisionment of any kind.

*) see Astromarkt, conspicuous in absence: http://www.astromarkt.net/unaspected-planets-and-missing-elements.html on not aspected planets and missing elements.

….More about Mars-Pluto and Venus-Pluto on Astromarkt.net