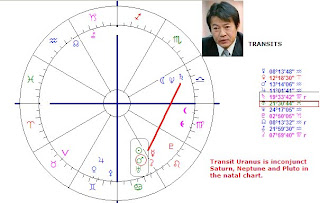 Mr. Shoichi Nakagawa, Japanese minister (see the link to Wikipedia) had to step back because he looked like drunk at a conference and because he behaved badly in the Vatican Museum. Stepping back = Saturn in the astrological vocabulary (Saturn = for taking your responsibility). And transit Saturn is now conjunct his progressed Sun. This reflects the mistake and the consequences.
In the progressed chart Uranus is conjunct Neptune, tightly, also. But how about the natal chart?
We see Sun square Saturn in the natal chart, being activated by transit right now! 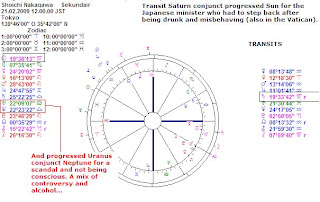 SATURN AND URANUS
By translation of light there is also Sun conjunct Uranus and Mars is conjunct Uranus and square Neptune. This month transit Uranus is inconjunct his natal Neptune, Pluto and Saturn. Uranus is the symbol of upheavel. The inconjunction reflects lost and so do the degrees of the planets. As the planets are in aspect in the natal char, any transit with them activates these aspects. And start to act..

There is another example of how natal aspects in his chart were activated by transit.When he was 30 (with Saturn's return) his father committed suicide. This also activated Sun square Saturn in the natal chart. His father had been a prominent local politician and soon after his death Mr. Nakagawa started a campaign to replace him and he succeeded in it. Saturn's return activated the Sun square Saturn aspect. And what happened in the end? It seems it had all been too much responsiblities and hard work. The effect of Sun square Saturn can be that you are too ambitious and fail (or fall). Several of the indications for this are given by Mars.
MARS
Mr. Nakagawa has a prominent Mars (rising before the Sun).Mars is conjunt Uranus, square Saturn and Neptune. This combination of Mars, Saturn, Uranus and Neptune offers opportunities and shows risks. Saturn-Uranus (for breaking free) can also mean 'being limited in freedom' (perhaps by the protocol). Mars-Saturn is for making mistakes (acts against the low or status quo) and Mars-Neptune's affliction unfortunately often reflects mistakes, too, possibly related to drugs and alcohol, medications or simply weaknesses. Saturn conjunct Neptune is the tighest aspect of them all and related to the prominent Mars. An addiction (Neptune) that caused a bad mistake (Mars-Saturn) is one of the possible ways to demonstrate the effect of the mixture of these planets.
EARTH SIGNS AND SATURN
As he has no placements in earth signs, he will be a materialist (trying to make a career, and
he did!). Saturn is the symbol of materialism and careermaking. And this Saturn is afflicted in his chart.
Of course, the moment of birth makes a difference and shows more. But even without that information it is clear that when you are an official and Saturn is your planet because of that, it is better not to have an afflicted Saturn or if you have one, to be very cautious and almost perfect.
WOMEN
According to mr. Nakagawa women are ment to arrange flowers, cook and sew. He didn't mention blogging. So this is it for today:) Click on the labels to get more information about the effect of Saturn, the inconjunction or to read orther posts about politicians. BTW, he has Mercury semi square Saturn/Pluto (Mercury 75 d from Saturn and 15d from Pluto) and that combiation of Mercury, Saturn and Pluto is often present in the charts of political strategic minds.