King Albert I and the mystery of his death 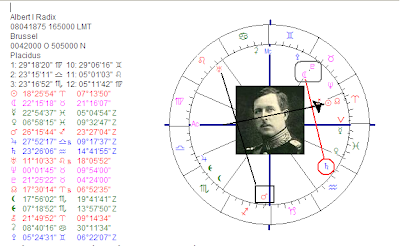 King Albert I of Belgium died when he fell of a rock on 17 February 1934 in Marche-Les-Dames. There has been a lot of speculations about this death, as he was a perfect climber. Perhaps it was suicide, because he sent most of his servants away on that day. What a mystery! And how convinient for the astrologer that the combination of mystery (Neptune and Pluto) is in his 8th house, the house of life and death. This mysterious death is important. The chart has Mars (ruler of the 8th house) opposition Midheaven.

The chart will not give the answer. But the chart is perfectly reflecting the mystery and the diffuse circumstances. He could be very moody and depressed, says the chart. He also had a bad moment, reflected by the progressed chart. But how about the 'pointing finger'?

DEPRESSION
Albert I had Saturn rising before his Sun. Saturn was square the Moon and Pluto, both in the 8th house. It may not have been usual in his family to be depressed, but this combination surely reflects depression. The emotions are strong and restricted. Duty, obligations and the heavy side of life came first. He liked to be alone and he like to climb. Saturn was in the fifh house of pleasures when he was born.

CLIMBING
This Saturn was opposition his Midheaven in the progressed chart, when he died. The heavy load of Saturn hung at the lowest point of the chart, where Mars is in the natal (Mars-Saturn = death). Does it reflect falling or does it reflect depression?

Picture that Saturn and notice that in his solar return chart Uranus was conjunct the Placidus 8th house cusp and was ruling the fifth house of pleasure, with Saturn in the fifth, just like in his natal chart. Perhaps this reflects dying doing what he liked most...

THE MYSTERY
He always had intense moods and most of the time not pleasant ones. And he had Mars sextile Saturn and biquintile Pluto to find a creative way to die if he wanted to. Mars (ruler of the eight house of life and death) has a crucial spot opposition Midheaven. Was it an accident, maybe a mistake?

ACCIDENT?
As it happens, I see a midpoint yod of Sun opposition Mars/Uranus. Should it be a finger pointing at 'accident' (Mars-Uranus)?

RELEVANT
Effect of Mars-Uranus, Mars-Uranus often is present in the charts of sudden deaths (and of those who take risks).