Chart of the day of birth of Miep Gies (100 today) 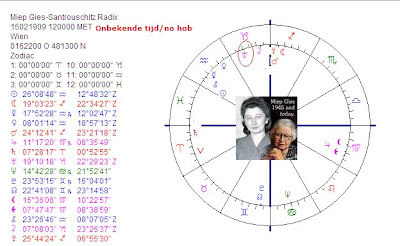 Miep Gies is known in connection to Anne Frank. She was Otto Frank's secretary in the house where the family Frank was hiding. She provided them with food. Later she hid the notes of Anne Frank until her father returned (as the only survivor). The notes were published as the diary of Anne Frank. Miep Gies was honoured with the Yad Vashem award.

Today Miep Gies became 100. On the day of her birth Uranus was the first outer planet rising before the Sun (the oriental planet). That is not uncommon in the charts of aged people.

Miep Gies has a tight Mars opposition Pluto. Mars and Pluto are in harmonious aspect with the Sun. The theme of use and abuse of (political) power is strongly related to her life and lifestyle. She has given many lectures about Anne Frank and her diary. Notice that the Sun is biquintile Jupiter, creating successful combinations of Sun, Mars and Jupiter and of Sun, Jupiter and Pluto.
(c) http://astropost.blogspot.com
Geplaatst door Astromarkt op 11:43 AM