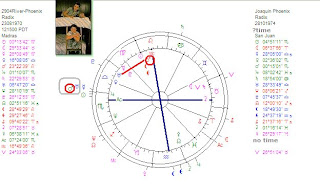 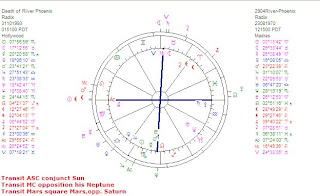 The chart of his brother River also responded to the transits of Mars, Saturn and Pluto. They aspected his natal Mars and Saturn. The combination of Mars and Saturn means 'blocked energy'. Pluto is the planet of life and death, danger, and transformation. The combination of Mars-Saturn-Pluto with Mars-Saturn links deathly danger to blocked energy or death or to a mistake.
Transit Saturn inconjunct progressed Sun
Transit Saturn opposition natal Mars
Transit Mars opposition progressed and natal Saturn.
Transit Pluto exactly conjunct progressed ASC
River Phoenix had progressed Sun trine Saturn in the year of his death (for being respected) and also progressed Saturn conjunct natal Saturn. That is a rather rare progressed aspect that signals a hard time.
He had stopped using drugs since a few month, but on that night he took drugs and as he was not used to them any more, they were fatal. He had a heart attack and died outside a night club.
Joaquin was 19 at the time.
The transits of Mars, Saturn and Pluto with Mars, Saturn and Ascendant of River and Sun of Joaquin link the dramatic death (Mars-Saturn-Pluto) to the condition of blocked energy of River and to this all to the life and well being of Joaquin. It is a very complex but clear picture of a tragedy.
(c) http://astropost.blogspot.com
Geplaatst door Astromarkt op 8:31 PM