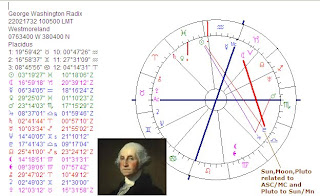 George Washington was born 22nd February 1732 at 10:05 LMT in Westmoreland, according to my files (but others say 10 sharp). It is a perfect birthday for a leader who will be remembered. The prominence of Sun and Venus tells us that he is a leader and a diplomat. He has a political mind and self confidence. And ambition, of course. Seven important reasons together helped him to be a president.
1. Prominence of the Sun
The Sun symbolizes leadership or at least: to draw attention. The Sun in Washington's chart does not make Ptolemaic aspects in sign or orb 5 degrees, so the Sun is prominent (what I name 'calling' for a call for leadership or performance). The Sun is half semi square the midpoint Ascendant/Midheaven, confirming the crucial importance of 'being in the center of it all'.
2. Prominence of Venus
Venus symbolizes art, skill and diplomacy. Washington's Venus is in the final degree of Pisces, conjunct Aries Point. The conjunction with Saturn is a conjunction 'out of sign'. So Venus does not make Ptolemaic aspect IN sign or orb 5 degrees and that is why I name Venus 'calling' in this chart. When your Venus is calling, you are likely to be loved or liked and that is a good thing for a president in a democracy (or he would not be choosen). Choices btw are related to Venus, too.
3. Combination of confidence
The combination of minor aspects of Sun biquintile Jupiter and sesquisquare Pluto reflects great self confidence and is a sign of success.
4. Combination of enterprise (and the military)
Mars (on the descendant) is exactly semi square Jupiter for successful enterprise. Mars crucial position on an angle shows the importance of the military (energy, muscles and drives). George Washington was a successful officer in the army before he became a president.
5. Need to be in control
The Moon in Capricorn is rising before the Sun (Moon is 'oriental') and square Pluto, 75 degrees Saturn. That is the combination for a 'die hard' administrator, a strategical servant of the state with keen ambition (and the need to be in control, too:). The orientation on the Moon reflects an orientation on the nation (Moon), emotional involvement (with a group of persons).
6. Political mind (strategy)
Saturn is 112.5 degrees from Mercury/Pluto. Pluto is 135 degrees from Mercury/Saturn.The combination Mercury, Saturn, Pluto is frequent in the charts of American presidents (and in fact of politicians in general). It shows the strategic political mind (telling what they want to be known and no more). See the article about USA presidents on my site Astromarkt.
7. Pluto for politics
Pluto is exactly 112.5 dg from Sun/Moon and 157.5 dg from ASC/Midheaven. That means that he was a politician in heart and soul and that power/money/politics were of crucial importance in his life.
The midpoint ASC/MC is the exact point where meridian and horizon are crossing the place of birth. Any aspect with this cross of angles reflects what is of crucial and vital influence.
The midpoint Sun/Moon is the crosspoint of who you are and how you were raised and symbolizes will and desire. With Sun/Moon = Pluto there will be a reigning need to be in control.
The Moon is also involved in an aspect with ASC/MC. So: Sun, Moon and Pluto are related to ASC/MC. The reigning need to be in control is of crucial importance in this chart. And that is how he became a president.
(c) http://astropost.blogspot.com