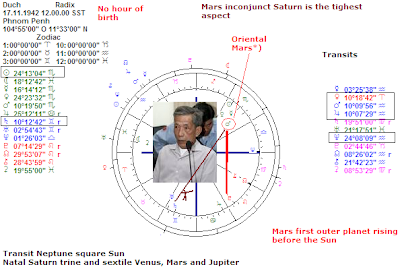 He faces the judge today, finally, with transit Neptune square Natal Sun. This transit means that he is in a period of being seen in a negative light. He is being confronted with what he wanted to reveal or forget. And the media (Neptune) is not on his hand. His name is Kang Kek leu or Kaing Geuk Eav, but in any case 'Duch' . He tortured people in the Pol Pot period of Cambodja. He was born 17th November 1942. In 2007/2008 his progressed Sun changed sign. And that was when he was arrested and his life style changed subsequently. It seems that he became a christian a few years ago, that he is sorry and that he cried when he visited the place where so many Cambodjans were tortured to death. Moon in Pisces...

There is no hour of birth available, so we do not know wether there are crucial placements on the cross of the birth chart. What we know are the positions on the day, valid for many. Still, this composition of planets should show some possible entries into the world of a man who killed fanatically, in certain circumstances, times and cultures, like in the days of the fanatic Pol Pot.

MARS, SATURN AND PLUTO
See how Mars in Scorpio, rising before the Sun, is inconjunct Saturn and square Pluto. The combination of Mars, Saturn and Pluto introduces the theme of unnatural death. The inconjunction of Mars and Saturn reflects the disproportional hard measures that he took to serve his master.

Notice how the Sun conjunct Venus and trine Jupiter allowed him to live on as if nothing happened between 1975 and 1979 (the years of the killing fields). It is alwasy a pleasure to have nice aspects, even if you are not nice...

Notice that in 1978 his progressed sun sign also changed - into Capricorn - and that in 1979/1980 the progressed Sun squared Neptune(and was inconjunct Uranus. That tells us about hiding (Neptune) and about liberty (Uranus) being unbalanced, hard to get or lost (inconjunct). The progressed Sun square Neptune of those days come back in memory now that transit Neptune is square the Sun. What goes around, comes around.

BIAS (a partisian)
I would like to point at Moon in Pisces. I have noticed before that the Moon in Cancer or Pisces were involved in the charts of those who misbehaved in war times. For example, I have the birth data of 3 women who abused and beated jewish prisoners in WW2 and they have these placements, too. See the article about bias (link below).

COMBINATION
The 17th of November of 1942 was a day that would likely 'produce' individuals who are very committed to their family or group or party. And this man was one of them. It was also a day for people who were willing to gain either way, possibly very fanatic in sports and politics and maybe, in certain conditions, these characteristics would work out the wrong way. Most of all, because Mars is oriental (rising before the sun and not being limited by a more prominent Mercury - for sense - or Venus - for kindness and sympathy)...Mars is often oriental in the charts of the war criminals in Ruanda, too. Yet, it could be the sign for an entrepeneur, someone who was very energetic or active instead of being a war criminal. That said,
. the combination of a Moon in the 'bias' signs,
. the strong drive to use any means to win and
. the luck he had to be supported enough to stay out of prison until he was 65,
. together with the fact that he became a christian at the right moment (so that it is mentioned in all newspapers, very helpful for his case)...

The issue of unnatural death (and danger) together with the possibility of being a fanatic partisian in a period of extraordinary violence and power...This all fits the life of Duch. He had the right components to become violent in scary times. And possibly he had significant placements on the angles to be a prominent war criminal. But without hour of birth thAt remains speculation.

More about the effect of Mars in the charts of war criminals...(c) http://astropost.blogspot.com