The controversial transit Uranus of Betancourt 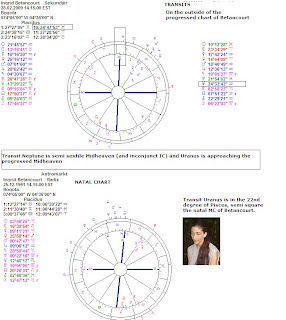 Jupiter inconjunct Pluto reflects the disproportional price to pay (Pluto) for success (Jupiter) and the danger (Pluto) of confidence (Jupiter). This inconjunction is a symbol of success, but... Read about the aspect with the meaning of 'but...' in the post about inconjunctions. Jupiter inconjunct Pluto is in the natal chart of Ingrid Betancourt. And it is activated now that transit Pluto is conjunct her natal Sun and transit Jupiter is square Ascendant.
Ingrid Betancourt payed the price after she went to a dangerous place in spite of advices. She was there together with other prisoners of FARC, like her friend Carla. Carla is no longer her friend now and neither are other co-prisoners, like for example the Americans who wrote a book about their period in the jungle. They say that Ingrid Betancourt behaved like a queen. How else can one behave with Moon in Leo?:) On Astromarkt.net I write about Moon in Leo:
"Those with Moon in Leo have a sense for status and sometimes they walk around showing off where there in fact is nothing to be shown but fake. It is a position for pretensions. They just have a need to draw attention and look royal (dressed up with 'jewels', 'furs' etc.).
Evita Perron, Margareth Thatcher, Nancy Reagan, Raisa Gorbatsjov and Queen Elisabeth have such a moon in their chart."
So perhaps they experienced her behaviour like that. More serious is the accusation that she endangered the lives of the Americans by saying that they could be FBI-agents. As to be expected with transit Jupiter aspecting the Ascendant, there is support too, and it is coming from other captives.

WITH URANUS: YOU ARE IN THE NEWS...
This controversy goes with a transit of Uranus semi square her natal Midheaven and the negative review of the past is reflected by the inconjunction of transit Neptune with her progressed IC. The press and the papers are reflected by Uranus and Neptune. See the news in Euronews
LEO MOON
Learn more about the basics of astrology (sunsigns, moonsigns, ascendant...) on my site Astromarkt: http://www.astromarkt.net/Basics.htm
BETANCOURT ON THIS BLOG
About the moment of liberation
About the crucial importance of spirituality
About her birth chart
About Betancourt and the support of Sarkozy
(c) http://astropost.blogspot.com
Geplaatst door Astromarkt op 5:06 PM