Today I saw a (romantic) documentary about the life of Enzo Ferrari, born 18 February 1898 (official date 20 February, but that was because it took his father 2 days to announce his birth) It was at 3 a.m. in beautiful Modena, Italy, the place were the Ferrari factory still is. He built the most beautiful car in the world. His chart is showing the successes and the bad moments in his life… 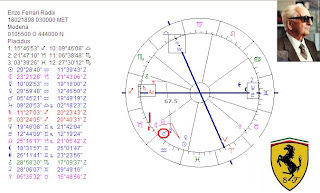 YOUTH
His youth wasn’t a happy one. His parents preferred his elderly brother. This is very typical of Saturn on the Ascendant. It is as if from the very start you had a disadvantage or a handicap. But there is another side of it and that is that he was a very serious and ambitious person and rather reserved himself. The picture in the chart shows him with dark glasses on and they seem to have been on very often. He did not like to show his feelings. There are several indications for hiding feelings: Moon in Capricorn (calling!), Saturn on the Ascendant and Neptune opposition Ascendant. In the documentary they make him say that the fact that he did not show emotions did not mean that he did not have them. But notice the lack of placements in water signs and the cool Moon and you will see that it was at least difficult to deal with emotions…

In the documentary he is 10 years old when he sees the first car in his life and starts dreaming. His father got ill and died not very long afterwards. And see how astrology matches with history! At age 10 he had progressed Sun inconjunct Jupiter and progressed Midheaven was trine Neptune. This symbolizes the disproportional self confidence that he had and the dream (Neptune) that easily (trine) influenced his career (Midheaven). The progressed inconjunction also shows us that he won a race by wooden car without engineJ, beating his elderly brother. He won, but (inconjunct Jupiter in the 3rd house...). The 'but' was that this moment intensified the bad relationship that he had with his brother. He also had progressed Moon trine Jupiter in those days and that is the best progressed aspect a person can get. This was the moment that he started dreaming about being a racer in the future.

CONFIDENCE
He always strongly believed that he would be rich and famous one day. Notice that Jupiter (ruler 1) is on the Midheaven trine Pluto on the descendant: Jupiter and Pluto are prominent in this chart! That reflects a lot of confidence and success as a result of that and all this in a prominent way! He was born to be a success. Mercury is opposition Jupiter/Pluto and conjunct Sun/Moon to express that he was great at convincing others (to invest in his dream). Uranus is also related to Sun/Moon and to Ascendant/MC: he was all in all a technician, innovative, an engineer.

DEATH AND SATURN AND PLUTO
Enzo Ferrari did not have placements in water signs and there is a calling Moon (a moon without major aspects) in Capricorn. He had 70% of his placements in air signs. This combination makes him a thinker and a communicator with sentiments at any possible level, but always in control (in Capricorn). In the documentary that lack of showing emotions is explained in the moment of the death of his father, who tells him not to cry. I almost forgot to mention: progressed Sun square Saturn and later square Pluto for the period after the death of his father. This Saturn and Pluto square comes back in times of death. In the First World War (1914-1918) his brother died and he broke his own arm to escape the front lines. Notice that the progressed Mercury is square Saturn and Pluto in 1917. And when his son Dino died in 1956 he had progressed Moon square Saturn and Pluto. Dino was born 29 January 1932 (progressed Sun trine Uranus), when he already had started the long lasting relationship with Lina.
Saturn is opposition Pluto in his chart and both are angular. That is why progressive aspects with Saturn and Pluto mark important painful goodbye’s in his life. Saturn-Pluto conflicts symbolize hard confrontations, intense ambition and the price you pay for that...

Enzo Ferrari was more often in the company of his friends and the racing team than with his wife Laura. Later he had a mistress (Lina). The son born out of the relationship with Lina on 22 May 1944 is now 15% owner of Ferrari. His name is Piero Ferrari.

PROMINENCE
Back to Enzo: he had an oriental Mars, Jupiter on the Midheaven, Uranus in aspect with Sun/Moon and ASC/MC, Mercury on Sun/Moon, Neptune and Pluto were on either side of the horizon and just as crucial was Saturn (conjunct Ascendant). The Moon was calling! There is almost no object in this chart that does not have a special place. Only the Sun and Venus and they are 'rushing into Pisces' but still in Aquarius as if reflecting the technical visionary. With so many prominent placements he was bound to be special. With Jupiter and Pluto angular he had enough confidence, too. And there were more then 10 midpoint combinations in the 22.5 degree range to support the statement of success in his chart, for example with Mars square Jupiter/Uranus. That is an excellent combination for an inventor.

DISCRETION: NEPTUNE+PLUTO
I like to mention Neptune in the 7th house and the Neptune/Pluto combination with the Descendant, pointing at the secret relationship with Lina. In those days in Italy divorce was not easy and in the first half of the last century living with a married man was scandalous. The Moon in Capricorn kept him with his wife and Venus in Aquarius and square Uranus (out of sign) provided the adventurous 'free' love with Lina.

HIS DEATH
When he died transit Jupiter was exactly opposition his Uranus (read about this aspect and death) and as Uranus was related to Sun/Moon and ASC/MC, Jupiter was also in aspect with the cross of the chart and the cross point of the lights.