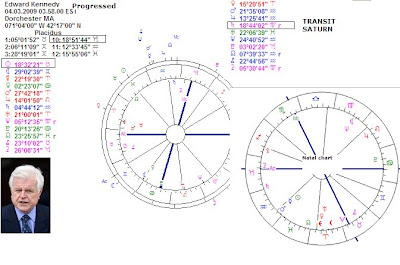 Whenever a person gets well deserved respect, Saturn is involved. So it is in Edward Kennedy's chart. Transit Saturn is now exactly trine his progressed Midheaven and trine the progressed Sun. And what happens? He will receive an honorary knighthood and become Sir Edward Kennedy. Gordon Brown will announce the award today. One of the reasons is his involvement in the dispute over Northern Island.

Saturn has an important role in the chart of Ted Kennedy. At the time of his collapse lately, there was a threefold involvement of Saturn. (Read that post). Why is Saturn that important? It is because Saturn rules his Ascendant (in Capricorn). And because Saturn does not make Ptolemaic aspects in his natal chart. I name that a 'calling' Saturn. It means that business, administration, responsibilities and ambition are highlighted in his life at any possible level. Up to knighthood:)