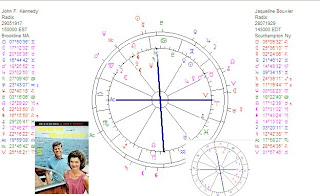 The marriage of Jacqueline Bouvier and John F. Kennedy ended with the death of JFK. This post is about the astrological relationship of the charts of this famous couple.

Jacqueline Bouvier was born with Venus and Jupiter in Gemini. Jupiter was in the seventh house of marriage. She married twice. In an earlier post about double bodied signs and Jupiter in the 7th you will find more examples of people who married more than once. They also had Jupiter in the 7th and/or Venus in a double bodied sign. Jacqueline Bouvier has a chart that tells us that there is a great possibility of marrying more than once. And the marriage with John F. Kennedy was her first marriage...

Apart from a wide quintile of Venus with Uranus, there are no indications for divorce.

I wrote about Jacqueline and John Kennedy before:

"Think of Jacqueline Kennedy. She married John F. Kennedy when she was 24 and that is not extremely young. When he died, she married an older man (Onassis). Her Venus is in Gemini and opposition Saturn. Jupiter is in her 7th house. There are two indications for marrying more than once (Venus in Gemini and Jupiter in the 7th). The usual indications for divorce are not found*).

JOHN F. KENNEDY
John F. Kennedy has a chart that shows the leader.
1. The Sun does not make Ptolemaic aspects and is square ASC/MC. He was the crucial centre of attention at any possible level. More about his Astro I.D.:
2. Neptune and Pluto do not make major aspects either (for idealism and politics, discretion and ‘the silent force')
3. Saturn on top is conjunct Sun/Moon (government, management, ambition, ...possible divorce)

John F. Kennedy married only once but he had several 'relationships' while married. It is said that he hired a dozen of prostitutes once and a while. Moon square Venus in double bodied signs reflects the need for women. And Jupiter is in his 8th house (of sex) and not in the 7th (of marriage). Had he still lived and stopped being a president, he would likely have had a divorce. There are two out of four indications for a divorce: Mars is square Uranus, Venus is semi square Neptune.".

But of course, he married her, and why?
1. He shared a Mars-Pluto aspect with Jacqueline (he has the semi square, she has the sextile). His Mars is sextile her Pluto! His Mars is inconjunct his Ascendant and opposition hers. (It crosses my mind that this looks a lot like the Mars-Pluto relationship in the Holloway case, click to see that post.)

2. His Moon is exactly trine her Northern Node (for emotional relationship, taking care together)

3. in the composite chart there is Sun conjunct Moon, a strong indication for creating a family life

4. His Venus -ruler 1 - is conjunct her Sun/Moon and that is a fine end of this story. Sun/Moon is family life, heart and soul. And Venus is sympathy and love. So at a particular moment in time his love was joining her wish to have a family life.

RELATED POSTS AND ARTICLES:
- About astrology:
. Calling planets
. Double bodied signs and Jupiter in the 7th
. Mars-Uranus on my site Astromarkt
. Void Moons and inaugurations

- About JFK:
Chart of JFK