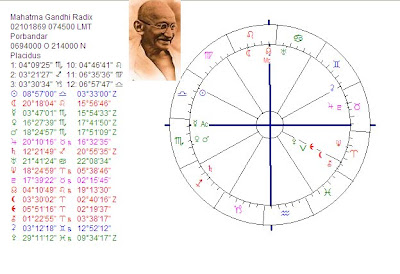 Mahatma Gandhi is a holy man to many and Jupiter-Neptune shows it. Mahatma Gandhi's glasses were sold at an auction today. Time to have a look at his chart.

I saw this: the chart of a man with will power, an emotional involved leader with a disproportional effect related to an ideal or vision, who (in the given situation - Ascendant) became a sort of an icon (Jupiter-Neptune). It is easy to see the issue of violence,too.

How did I come to this conclusion? I used my usual method for quick readings as follows:

1. Astro I.D.
I see a calling (unaspected) Mercury on the Ascendant, Node on the MC, Moon rising before the calling (unaspected) Sun.
The calling Sun refers to a vocation to be drawing attention at any kind of level (perhaps performing or as a leader). Gandhi was a leader.
He was above all busy for a community of people (family, folks, a nation) and that is shown by the conjunction of Midheaven and Northern Node.
He was emotionally involved and behaving like a king or leader, too. He had a need to be leadig and to be in the centre of attention.
He was a person with an important message (calling Mercury on the Ascendant) in his eyes.

2. Quick scan
60% of the placements in fixed signs: he had a strong will and perseverence
Calling Sun Libra, oriental Moon Leo, Asc Scorpio conjunct Mercury: we see a very strong willed diplomat with a message

3. Moon square Jupiter and Pluto: he was used or became used to successes, a very popular man. With Venus square Pluto he had strong sympathies and antipathies and equally strong needs and habits. It was not an easy person to live with (and he had serious problems with his children). Moon and Venus are related to Pluto and so is Mars. Mars opposition Pluto is almost the tightest aspect. Bernadette Brady says that opposition refer to what others are doing (related to you). Mars - Pluto is the use and abuse of violence. Gandhi fought (Mars) against (opposition) violence (Pluto). And he died in a violent way. He was murdered.

Mars inconjunct Neptune is very important in this chart. This aspect is reflecting the disproportional effect of acts related to a religion, vision, ideal or belief.

BTW Moon-Jupiter aspects are frequent in the charts of top politicians who need to be popular to be elected.
(c) http://astropost.blogspot.com
Geplaatst door Astromarkt op 10:30 PM