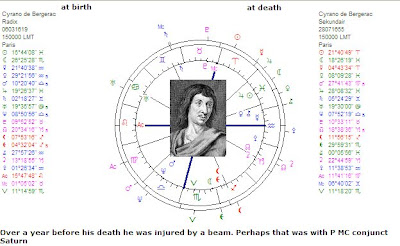 When you think of Cyrano de Bergerac, you don't think of science fiction, but in fact the books that he wrote were early sf. He had a special nose for it. Jupiter is trine Uranus in his chart, tightly. The Jupiter-Uranus connection offers a sort of a wisdom or guideline for the future. The combination of Jupiter and Uranus or the related signs are always important in the charts of astrologers, astronauts and modern popes. I think that is because Jupiter-Uranus means the extra-terrestial teritory (in mind or for real). Cyrano de Bergerac wrote about a voyage to the moon in a sort of a box with a crystal as a source of energy. He was at least considering the possibility of stepping on the moon and he thought of it in the 17th century, less than 100 years after Galilei's conflict with the church about the nature of universe. Uranus is involved in a midpoint yod with Sun/Moon (the finger points at Uranus) and Uranus is of course the symbol of the avant garde.

The Jupiter - Uranus trine is not the most important issue in his chart. We see a tight inconjunction of Mars and Pluto (on top). This is reflecting disproportional dangerous or political struggles and fights. And as he died with transit Saturn opposition progressed Venus close to the Descendant and Saturn close to Midheaven in the progressed chart, I suppose that the story is correct that he fell due to a beam might be true. On the other hand, his Sun is inconjunct Ascendant and that might also reflect health issues.

If you want to know more about Jupiter and Uranus or inconjunctions, then click the label 'Jupiter Uranus' or 'Inconjunction' right below this post...