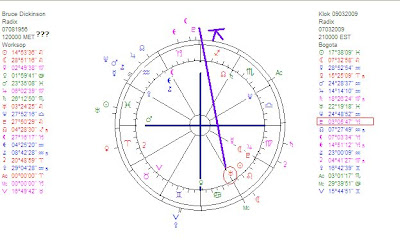 How popular can one be when the fans start a riot just to get into the place of the concert? Bruce Dickinson is the lead singer of Iron Maiden. On the7th March, when he was in Bogotá, Venus was trine his Sun and Jupiter opposition natal Sun. Venus-Jupiter-Sun is the symbol of a party going on. But .... outside there were arrests. Watch transit Pluto inconjunct his natal Uranus. It is reflecting a disproportional (inconjunction) dramatic change or revolt (Uranus-Pluto). And often with these kind of aspects an arrest will be the exponent of the symbolic combination. In this case, it was not himself who got arrested, but I bet that he was shocked when he heard about the riots. The consequence is that the officials hesitate to have another hard rock concert...

More Iron Maiden in the post about the force of the beat
http://astropost.blogspot.com/2008/09/force-of-beat-about-loudness-in-music.html