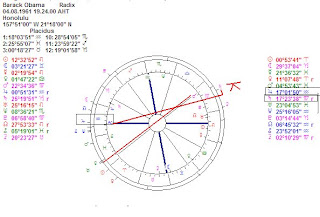 For the second time Barack Obama made a wrong joke. First he offended a former first lady by confusing astrologers with clear voyants, now he compared his bowling abilities with those of a Special Olympics athlete. From time to time he seems to talk too soon. As a president is a 'heavy weight' the words of a president weigh a lot.

Transit Saturn is right now inconjunct his natal Ascendant. Any wrong presentation will be disproportionally in his disadvantage. But, lucky Obama, he also has Jupiter near the Ascendant right now and that is a great help. He is being supported anyway. The combination of Jupiter and Saturn is reflecting ups and downs.

There is an aspect combination active right now that explains the quick and wrong joke. Mercury and Uranus are opposition his natal Mars. Mercury, Mars and Uranus together reflect the quick (and sometimes too quick) answer. His presentation was very sharp, smart and resourceful, but...Saturn was there.

Other reports about Obama...
Geplaatst door Astromarkt op 10:24 AM