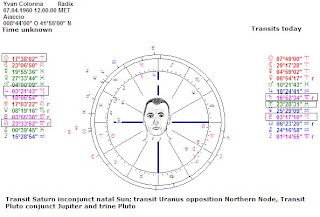 Yesterday Yvan Colonna was sentenced to life imprisonment, in appeal, for the murder of the Corsican prefect Claude Erignac. That happened on February 6, 1998, at 21:15 (some sites also mention 9:05 p.m.)
Yvan Colonna, a nationalist and the son of a former recipient of the Légion d'Honneur (a socialist deputy)l, was born 7 April 1960 in Ajaccio. He became a militant nationalist in 1981. He says that he is innocent. Fact is that he was militant and joined in actions. Another fact is, that his life is strongly connected to the murder case and to the wish of separatist in Corsica is clearly shown in the chart. Astrology doesn't judge. Many judges and lawyers have the same kind of aspects as their suspects have. Astrology only shows that there is an important theme to deal with. In this case: deadly danger and limited freedom or indepence.

The themes of unnatural death and restricted freedom (and resistance against it) are very importent in his chart. They are shown by tight aspects. Mars, Saturn and Pluto reflect the danger of death. Saturn and Uranus together show the issue of the limited indepence and the end of freedom (linked also to communications: freedom of speech).

Venus is an important planet in this chart. Venus doesn't make Ptolemaic aspects in sign so that Venus is highlighted. Venus is half semi square Mars and that means: passion. Venus is strongly connected to the theme of unnatural death.

BTW There are no placements in air signs ('communications at any possible level, but sometimes you just cannot reason with him'). 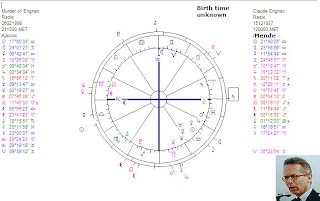 CLAUDE ÉRIGNAC was the prefect who was murdered. He was born in Mende, France, on October 15,1937 (age 60 at the moment of the murder). Uranus of Colonna's chart is biquintile the Mars of Erignac's Uranus. Their Saturns are 72 degrees apart. Their charts are creatively linked by the theme of restricted freedom and/or independece.

When he was shot, the Descendant of the moment was conjunct the natal Saturn of Erignac. His progressed Pluto was inconjunct the Midheaven of the moment. Saturn-Pluto connections tell us about the bad side of politics. Untimely death could be the translation of the joined force of Saturn-Pluto on that moment. It happened to be a moment that triggered Saturn and Pluto in his natal chart.

The progressed Venus of Colonna was trine the natal Sun of Erignac. Venus is an important planet in the chart of Yvan Colonna. Venus is related to Mars-Saturn-Pluto (the danger of death). The progressed Mars of Erignac was square the progressed Sun of Colonna. This illustrates a sort of a political fight or competition in the year of the murder.

Calculation: for every year you add about one degree to the natal position (or see the ephemeris for the true positions). At a certain moment the progessed Sun moves to the next time. The years before and after are often periods of transformation to another lifestyle. (Any transit or progressions at that time strongly influence the nature of the lifestyle to be).

On the left you see links to sites that offer a free calculated chart, also for progressions and transits.

For more charts related to crime, imprisonment or politics, click the labels below this post. For more information about the aspect Mars opposition Pluto (the strong drive, the use or abuse of influence, force, power or...having to defend yourself) see my site Astromarkt.
Geplaatst door Astromarkt op 11:53 AM