VENUS QUINTILE PLUTO
I won't speculate about Venus quintile Pluto regarding her private life here. Venus and Pluto together intensify sympathies, antipathies and relationships, and often there is a price to pay for love and luxury. See the article on Astromarkt:
(Venus-Pluto, the beauty and the beast united).

But Venus-Pluto is also the money axes (earning - Pluto- love and money -Venus - as a theme in life). And the quintile is reflecting creative ways to connect Venus (desires) to Pluto (values). There is a potential to earn money with being creative and Mrs.Smith is not an artist.

Venus-Pluto-aspects or Venus and Pluto in important positions in the chart tell us that money and love has it's price in the life of chart owner.

CHART
Here is the chart with the natal positions on the day of her birth. 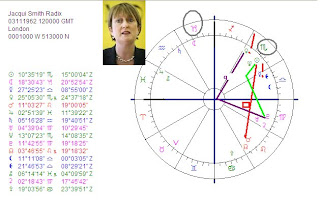 We see a tight square between Sun and Mars and that is one of the indications for possible divorce in the chart of a woman. This square is being activated by today's transits of Mars with Mars and Sun.
Her Moon is in Capricorn (showing a need to be managing, to be respected and to be decent). That won't make this easy. But this Moon goes with a Sun in Scorpio: I think she is tough enough.

Today, transit Mars is inconjunct her Mars and oppositon her Pluto (Mars is semi sextile Pluto in her natal chart). Mars is also trine her Sun rigth now. The combination of transits shows being hit (or being the target) in a disproportionate way (Mars inconjunct Mars) or in a way that ends with giving up on something (her job or her husband?) in a political struggle (Mars-Pluto). See the article about Mars-Pluto, on my site Astromarkt.