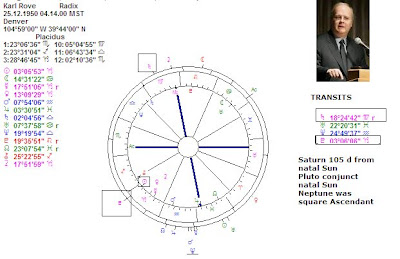 SUN-PLUTO
The progressed aspects and transits that relate planets who are in aspect with each other in the natal chart, are the most important transits and progressions. They activate an existing issue that often keeps coming back.
With Sun-Pluto authority, power (and stress) are the issue. The aspect is almost always present in the chart of footballl coaches. The authority of coaches is related to the fact that they are experts in their job and to winning or losing games. It is the aspect of power play, too. With Sun-Pluto you want to win or overcome problems and there will be opportunities to use the force and strength needed to battle stressful times. Difficult aspects express difficulties in the way a person wants to win or overrule, perhaps because they are too fanatic, severe or strict.

Pluto's transits and progressions often show up when an artist has a 'come back', most of the time because there is a financial problem. Pluto often makes it a problem to continue in the way you did before. Something changed and you must try to 'survive' (sometimes litteraly).

Rove's transit Pluto conjunct Sun might force him to 'come back' and 'replay the game', while he actually resigned on August 21, 2007. That was nine months after his progressed Sun changed sign. Usually the changing sign of the progressed Sun indicates a change in the way of living or a life changing period.

NATAL CHART
In september 2008 I wrote about Rove's chart:

ALL of his planets are afflicted and harmonious aspects are rare*). The tightest aspect is Sun sextile Jupiter, however. I see that as another indication of the validity of narrow aspects. He DID improve his life and have success, whatever political opinion you may have about him. At the time of the Bush campaign it was said that Karl Rove was the man behind the sleaze ads of those days...

Karl Rove did not have an easy personal life and yet managed to get on top of the USA administrations. That is maybe the effect of hard aspects. They force you to move on. But it sure was the effect of the fact that Mars, Jupiter and Pluto are prominent in his chart.
See Jupiter angular (on the IC). Jupiter is inconjunct Saturn (for the hierarchy and the disadvantages of success). Mars is calling!, inconjunct Uranus (for special efforts and a short circuit). And notice that Pluto is on top of this chart. Politics, money, influence and power above all...The combination of Mars calling, Jupiter angular and Pluto on top is the combination of Mars-Jupiter-Pluto, a success combination! Pluto is the Apex of a midpoint yod with Mars/Jupiter for another success combination.
(.....)
but mid January 2009 he will have the progressed Sun inconjunct Saturn. Should that be an indication of Republicans losing, I wonder? Anyway, this aspect will make him lose control or status somehow. Notice that he has Jupiter inconjunct Saturn for ups and downs or are they downs and ups?

And as the Republicans lost indeed, Rove lost his status and now with Pluto conjunct Sun he faces challenges and stress. He will testify in the case of the attorneys who lost their jobs apparently because they did not do what republicans wanted them to do.

MERCURY AND PLUTO
In his progressed chart Mercury is opposition Pluto. In December Mercury will be opposition natal Pluto. Mercury-Pluto is mirroring 'change of mind', possibly under pressure. The progressed aspect is activating the natal Mercury inconjunct Pluto (disproportional power of communications). Pluto sometimes means a treasure and other times Pluto means 'the price you pay'. With Mercury inconjunct Pluto there is the treath that there is a price to pay for what you say or said (influencing others).

In his natal chart Mercury is inconjunct Pluto. AND semi square Saturn. The combination of Mercury, Saturn and Pluto is frequent in the charts of politicians. It means that they are die hards in communications. (See the posts about Mercury and lies...)

ALL in all we see transformational progressions and transits coming from the planet of politics, power, challenge, influence and force: Pluto. It must be a difficult period for Rove, and the fact that he has Sun square Saturn (ruler Midheaven) doesn't help. This aspect shows ambition, ruling alone and the possibility of public decay if you make mistakes or do the wrong thing.

RULE OF 3
Transit Pluto conjunct Sun and Saturn 105 degrees from the Sun completely mirrors the natal composition of Sun square Saturn and sesquisquare Pluto. But all difficult moment come in 3. Transit Neptune square the natal Ascendant of Karl Rove symbolizes the bad press (the media are related to Neptune) and 'being suspect'.

More about the testimony on New York Times...

PS
For more about the explosive nature of Mars inconjunct Uranus, see the article on Astromarkt.