TV chef cooks are more important than ever and I happen to be fond of cooking lately, so this is a perfect actual moment to pay attention to the how's and why's of cooking in a natal chart. I studied the charts of the (days of birth of) 10 cooks and here is the result! This is the astrological recipe for famous (tv) chef cooks: it takes an important Ceres and a dito Moon with indications for success and fame. And perhaps you need the right oven and temperature, too!:)...The charts are included below.

CERES
The basic ingredient is Ceres. Ceres is the symbol of nutrition. When Ceres is prominent the basics of nature, agriculture, roots, genes, seeds and all that is from 'mother earth, are prominent in your life. Ceres has an important place in 50% of the charts of famous cooks and makes a tight aspect in the other 50% (and is perhaps also in an important position, but we don't know).

Five out of ten charts have Ceres 'calling', which means that Ceres does not make Ptolemaic aspects in sign or orb 5 degrees (see the charts 1, 2, 3, 4 and 10).
This signals that the principle of nutrition is important at any possible level!

Cook 6 has Ceres at a crucial spot down under in the chart. Cook 7's Ceres is close to the Ascendant. Cook 5's Ceres is conjunct Venus (tight) and square Moon. Cook 8 has Ceres conjunct Mars, tightly. Cook 9's Ceres is tightly square Mercury. And when I say tightly, I mean with 1 degree of orb. In the charts without HOB Ceres could of course have a crucial position on the angles, in aspect with ASC/MC or Sun/Moon, but we don't know. Maybe it is enough to know that the Ceres is part of the recipe in 50% of the charts.

MOON (with Venus)
Add Moon in a sign with style and taste (like Taurus or Libra) and/or a Moon in aspect with Venus and/or Neptune (for artistic senses) and you have an artistic cook. In the 3 charts of cooks with known hour of birth, the Moon is angular in 2 cases and in the other one the Moon is oppostion ASC/MC (which is at the cross of the angles). The sign of the Moon (Cancer) is almost always also of importance.

DRAWING ATTENTION OR HAVING SUCCESS
Complete the recipe with indications for fame and you have a famous cook (Ceres/Moon).

Take the chart of mr. Paul Bocuse (cook number 7) who's Jupiter is the first outer planet rising before his Sun and positioned on the Descendant, who's Moon is conjunct Descendant and Mars is 'calling' with Mercury opposition Ceres as the tightest aspect.
The combination of the angular Moon and Jupiter with the 'calling Mars tells us that he just has to DO something (perhaps he is a workaholic) and that he is very popular (Moon conjunct Jupiter on the Descendant). Venus is square Jupiter/Neptune, Jupiter is opposition Neptune/Node and Mars is semi square Jupiter/Neptune...there we see the devoted audience/public, the fans and the followers.

Or see the chart of Julia Child (cook number 6) with Sun and Moon 'calling'!, angular Jupiter on the Descendant for drawing attention and the importance of 'fashion and habits' at any level together with enthousiasm and a convincing presentation. The Moon is the apex of the midpoint yod with Asc/MC and that is telling us that her sense of style and taste (Moon in Libra) is of crucial importance (Asc/MC) in her 'vocation' (as the Moon is 'calling' her...). Ceres is 'top down' in her chart, at the lowest point, an important spot.

This was the recipe for famous cooks. If you have an important Ceres, perhaps you feel at ease when you are cooking. If your Moon is also important and related to Venus or in a a sign ruled by Venus (so that you have a fine nose for good food), maybe you love to cook. Check your chart. 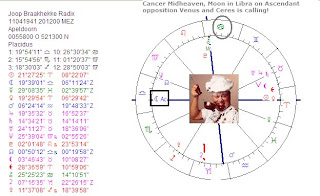 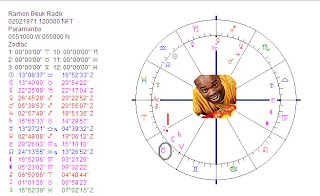 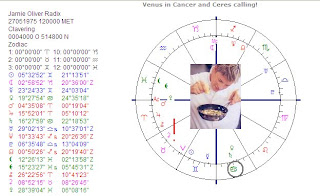 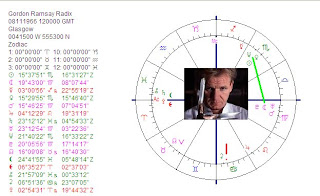 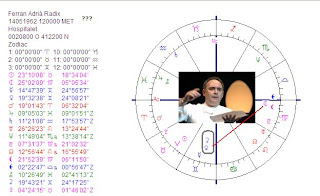 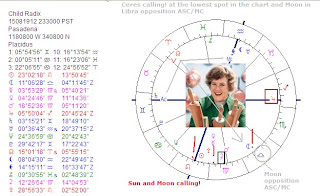 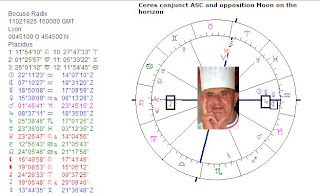 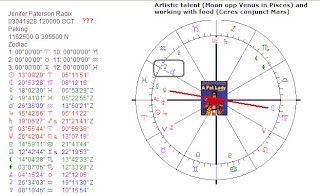 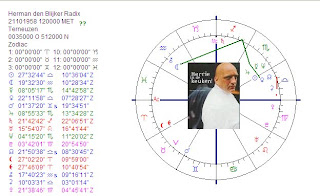 ALSO READ:
Post about the chart of Gordon Ramsay
About the Moon, menu and diet, see my site Astromarkt...