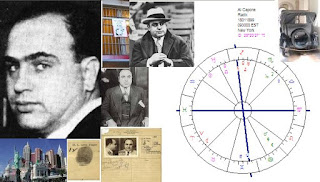 Al Capone's birth chart is over 110 years old. Astrodatabank gives 18 January 1899 at 9:30 NY, with Pisces Ascendant and Saturn on Midheaven. He died when he was 48, due to bad health. So it is not amazing to see Saturn and Neptune on the meridian. The combination Saturn/Neptune often is reflecting illnesses and weak 'status'.

Al Capone was a criminal. What difficult aspects tell us about certain necessary characteristics for this 'job'?

1. Mars semi square Pluto
That is an aspect that reflects the use or abuse of violence and force.
Al Capone seems to have been the 'master' behind a massacre.

4. Sun biquintile Neptune and sesquisquare Pluto
Double life and secret force (discretion).
Now is not the mob famous for the 'omerta'?

5. Venus on top, opposition Pluto
The importance of finances and values or a...greed?
More about the aspect Venus-Pluto on my site Astromarkt...

ASTRO ID: SATURN-URANUS
When you work with the Astro ID method that I wrote about in Dutch, you will soon learn that the most prominent planets are those rising before the Sun, on an angle or without aspects. Saturn is the first outer planet rising before Al Capone's Sun. Uranus does not make major aspects in sign or orb 5 degrees, so Uranus is 'calling' (active at any possible level). Saturn and Uranus are important, at whatever hour he was born. And the combination of Saturn and Uranus is the combination of limited independence and restrained freedom (or the resistance against barriers). This seems to me to be an important scar to mention in the astrological passport of Al Capone. For more examples of the effect of Saturn-Uranus, just click the label below.

Conclusion: maybe circumstances drove this ambitious (Saturn the first outer planet rising before the Sun) rebellious (Uranus calling!) man into the hands of the mob. Perhaps he could not have made it anywhere else, in New York:)