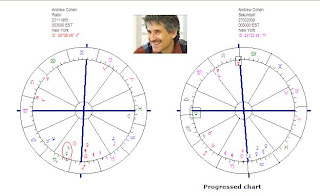 EnlightenNext, that is the name of the magazine of Andrew Cohen. He is a controversial guru who's mother wrote a book called 'The mother of God' (...) in 1997 and who's former follower André van der Braak wrote 'Enlightment Blues' in 2003. This year his business is expanding to The Netherlands.

Andrew Cohen's birth data are given on Astrodatabank.com: 23rd November 1955 at 00h30 EST NY. The Sun just entered Sagittarius, his Moon was in Pisces at the time of birth. This combination reveals the ideological (Pisces) conviction/publishing (Sagittarius).

After the transit of Neptune with the Sagittarian Sun (in 1970/1971( he had a 'cosmic experience'. In 1986, when his progressed Sun changed sign, his life changed. He met Sri Poonja, a guru, and started to be a teacher. And here I see the power of the Moon, not making any major aspect within 5 degrees, in Pisces...The Moon is the symbol of educating and in Pisces it is likely to be in the amorphous field.

Andrew Cohen is a spiritual teacher' and publisher. But he is first of all a manager, says his chart. Why? Because Saturn in Scorpio (the 'die hard') is rising just before the Sun, conjunct Mercury for communication and business strategy.
With this alinea all of his chart seems to have been covered: he is in spiritual business. And I see at least 10 midpoint combinations for successes, such as Pluto semi square Sun/Jupiter and Mercury/Jupiter, Jupiter semi square Sun/Pluto and Venus 112.5 Jupiter/Pluto.