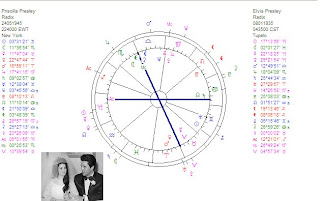 Elvis Presley and Priscilla both have Sun trine Neptune and both have Neptune on top of their charts. Sharing Sun trine the elevated Neptune gives them a sort of a romantic view of life and of each other. He was of course her idol... But her Neptune is inconjunct his Moon and so there is the risk of a lost and no balance in the romantic needs. And did they match? No, they did not.

BUT:
- Her Sun is square his Moon. It is a usual Sun-Moon combination. She was the realization of his romantic needs.
- His Sun is trine her Jupiter. When she met him, her progressed Sun was square Jupiter: her life style improved, she was starting to be a success (and his progressed Venus was conjunct his Moon - he fell in love).
- His Sun is square her Mars. Her disproportionate drive to grow and make life better is linked to his life. She stimulated and activated him. His Sun and her Mars were in aspect. Her Sun is semi square Mars - a sign for possible divorce -. This relationship seems to have been 'ment to be'. Just like Sarah and Andrew they seem to have been made to divorce each other:).
- His Mars-Ascendant combination is in aspect with her Uranus and his natal Mars is biquintile his Uranus (a sign for a possible divorce). The relationship was a flaslight relationship that offered the chance for him to be a 'free man' even while married (he had to work:). She was often alone (re: Saturn in the 7th).

Often, when people with indications for possible difficulties in a partnership come together, they have found the right kind of person: the one that offers the opportunity to marry twice, to divorce or to remain alone for the rest of their lives.

PRISCILLA
Priscilla never remarried (but instead she had a long lasting relationship). She has Sun semi square Mars (one of the indications for divorce ub teg cgart if=. Saturn is in her 7th house, trine her Moon ruler 7. She married once. There have been other relationships, but she never married another man. Her Venus (in Aries) and Jupiter are 'calling' (not making major aspects) and they are a biquintile away from each other. This combination expresses a creative way to make more fun. Venus is 105 degrees from Pluto. The Venus-Jupiter-Pluto combination tells us about earning or gaining a lot of money and sympathy. Of course, Priscilla Presley started her own career after the death of Elvis. (That was on August 16, 1977 with transit Pluto trine Priscilla's progressed ASC, followed by progressed Moon opposition Saturn.)

ELVIS
Elvis had two indications for possible divorce: Venus sesquisquare Neptune and Mars-Uranus biquintile. The latter might be indicating that he was creative enough to find another way to be a 'free man'.

CONCLUSION
They didn't match, but they found each other in sharing the same dreams and romantic illusions in the beginning...She married her idol and he married his fan. It could not last for ever. It was their first marriage and both have indications for divorce and/or difficulties in marriage in their natal charts. Her Uranus on his descendant says enough: it was a flash light exiting relationship. And the batteries ran out of power.

More about Elvis Presley:
Reading of his chart

Sun trine Neptune and the love of dogs

Marrying your idol...about the wifes of Brad Pitt