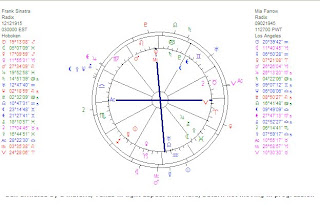 Frank Sinatra and Mia Farrow were a couple. Why? And why not forever?

Often people try to use astrology to see if a partner is the 'true' one, but sometimes the 'true partner' is the one who leaves you in the end and only suites you for a brief moment in life. And sometimes a marriage is a simple mistake:)

Frank and Mia Sun signs matched. If they did a simple online test called 'Do our starsigns match' the answer would have been 'Yes, they do'. His Sun is sextile hers. And signs don't mind about differences in age. Even their moons are not in conflict. But then it starts...Venus and Mars do not match!

The aspects of Venus and Mars first create passion and love, but then it turns into a conflicts. There is passion at the start but differences tear them apart later.

So if they were asked if they matched, the answer would have been: 'Yes, you can ( live together as man and wife), but...there might be conflicts later'. Would they have listened? Probably not. And maybe that is a good thing, who knows.

FRANK AND THE ARTISTIC PATTERN
For the artist in the chart of Frank Sinatra, see my blog Art& Astrology http://art-astrology.blogspot.com/2008/12/astrology-chart-frank-sinatra.html

MIA FARROW AND THE PATTERN
For the artist in the chart of Mia Farrow, see Art & Astrology http://art-astrology.blogspot.com/2009/01/astrology-chart-mia-farrow.html