The keys to divorce in the chart of Soraya

Soraya was the wife of the last Persian Sjah and he divorced her because she did not give him children. Dutch astrologer Ram found the keys to divorce in female's charts, decades ago.
They are (see the chart below):

a. Afflictions between the first and seventh house

b. Sun in affliction with Uranus
(Sun is 67.5 degrees from Uranus in Soraya's chart and that is semi square + half semi square and I don't know how to name that in English, perhaps sesqui semi square?)

c. Venus in conflict with Uranus

d. Sun in conflict with Mars
Soraya's Sun is semi sextile Mars and her Mars is inconjunct the Sun of the Sjah, who was born 26 October 1919 at 4:41 a.m. GMT in Teheran. (The semi sextile and the inconjunction activate each other).

e. Mars in conflict with Saturn
Soraya's Mars is trine Saturn...But her husbands' Mars is conjunct Saturn. So these people share a Mars - Saturn aspect. On Astromarkt I write about that:
Mars-Saturn: working hard together as long as possible (like Queen Elisabeth and her late mother), sharing the same frustrations, not much fun (unless there are other indications). This aspect might indicate a lack of shared activities.

g. In some cultures having children is important enough to divorce in case of difficulties in getting them.
Ceres is crucial, as Ceres is at the bottom of Soraya's chart*). The Moon is in the fith house AFFLICTED by Jupiter and Pluto (which means a lot of success as a woman, but...) 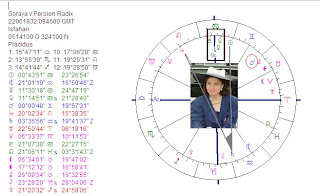 SPECIAL SITUATION
If a woman has 1 or more of these influences, it will be more difficult to get or remain married. Soraya has 2 of them. But..in this case, there was a special situation. The Sjah seems to have loved her (although he quickly remarried), but was under pressure to leave the woman who failed to enable his dynasty to continue. Another thing is, that she was not supposed to marry again or find a lover after the divorce (or loose her life of desired lazy luxury ever after, reflected by Venus on the MC), but... she had to stay alone. And she was only 26 years old! When she was just married, she had progressed Venus conjunct Sun and she started a life in luxury! But let's see about her natal chart.

IT TAKES MORE AND ...A PRICE TO PAY
The Moon in Aquarius is opposition Jupiter, sextile Uranus and inconjunct Pluto. I like to have a closer look at the Moon inconjunct Pluto. An inconjunction often reflects 'but's' and Pluto is always there when there is a price to pay. Or when you have to give up on something. Pluto is on top of her chart, showing the power of politics, money and ...the importance of issues of LIFE and death (the continues cycle of life). This prominent Pluto is inconjunct the ruler of her Midheaven (- position, status -). She had an independent life in great wealth, but the price was losing her status. Perhaps the Moon opposition Jupiter in her chart shows that being a person was not enough and more was needed. With Moon-Jupiter it always takes more!

PS I wondered if the hour of birth ((9:46) is estimated by an astrologer (putting Moon and Jupiter on the cusps of the Placidus 5/11 houses) or if this is her real hour of birth. It might be true, because there is also Saturn opposition Jupiter/Midheaven with Saturn as the planet the finger is pointing at, indicating the possible fall/step back after a rise in society.

BTW Princess Diana also had Pluto on top of the chart...

*) Queen Fabiola of Belgium had no children with King Boudewijn to their deep regret and Ceres is on her Descendant. I don't know if it is a coincidence, but Queen Fabiola also has Venus on the Midheaven. She does not have Moon in aspect with Jupiter