Chart of the shooting in Germany 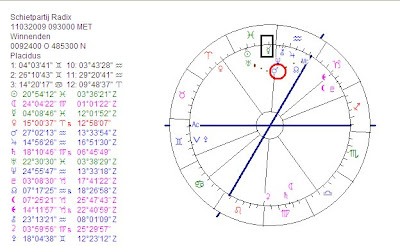 When there is an event, the chart of the moment holds information about the moment, as if the chart is mirroring the event. It is not vice versa. Things happen at a certain time and moment that sort of enables the event. But it is not so that events need to happen at a certain moment and place. Every day there is a moment that Uranus, Mars and Pluto have key positions in the chart. But (luckily) not every day there is a shooting at such a moment. Today is an exception. You see the chart of the moment of the shooting in a German school this morning at 9h30 in Winnenden. A former pupil, age 17, killed 9 persons, perhaps with the guns and pistols of his parents.

What do we see in the chart?
- The midpoint Sun/Moon is exactly square Uranus,symbol of shocks (ruler Midheaven).
- Pluto (symbol of transforming change) is square ASC/MC
- Mars - the military symbol - is the 'oriental' planet (the first outer planet rising before the Sun)
- The tightest aspect is Moon inconjunct Neptune

Mars, Uranus and Pluto reflect a moment of an act that caused a dramatic change. Mercury (symbol of school and youth) is on top, square Ascendant and we see Mars between the conjunction of Sun-Uranus and the Aquarius Midheaven. Mars-Uranus combination often reflect the sudden attack (or explosion).