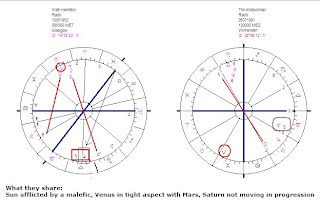 The time of birth of Tim Kretschmer, the killer in the Winnenden massacre, is known now. He was born 26 July 1991. His chart and that of Watt Hamilton (the killer in the Dunblane massacre) have much in common. The correspondence is clear, even without hour of birth. I added the event's chart with the natal and progressed positions of Kretschmer. 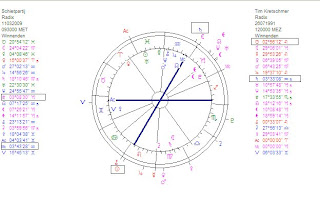 THE EVENT
The chart of his day of birth is not an easy chart. It has a tigh Sun opposition Saturn and 105 degrees from Pluto. As these planets hardly moved or retrograded, he had serious (Saturn) problems (Pluto) with life in general (Sun) all of his life. Saturn makes life hard and confronts you with limitations or barriers. Pluto makes life difficult and challenging or dangerous. These are unpleasant aspects and sometimes they show fysical or mental disabilities or complications. 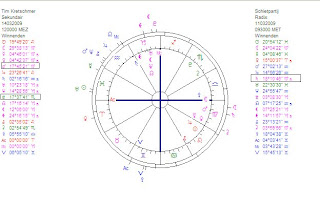 About two years ago the progressed Sun had moved 15 degrees and was square Pluto, so that problems came to the light and intensified. And at the moment of the shooting the Saturn of Kretschmer was conjunct the Midheaven as if his shadow hang over the place. Every day there is a moment that your Saturn is in contact with Midheaven and every day there is a chance for a big or small mistake, error or failure. At the moment of the shooting, Kretschmer had that 'bad moment'.
On the day of the shooting (and his death) transit Saturn was exactly conjunct his progressed Mars. These are in general indications for a goodbye, lack or end of energy (i.c. death) and depression.

CORRESPONDENCE
He shares some things with the killer in the Dunblane massacre that I wrote about recently.

2. Saturn did not move in progression
In both cases Saturn had not moved much since birth and remained in the same (difficult) position until the moment of death and disaster.

3. Venus in tight aspect with Mars
Venus is in aspect with Mars at birth and in a growing quintile with Pluto in the chart of Kretschmer. Due to retrogradation, this Venus-Pluto quintile became exact this year, the year that progressed Mars was sextile Pluto! The violent act is shown by Mars sextile Pluto in the progressed chart and there is a progressed quintile between Venus and Pluto. This combination activates the sexual problems.
Venus is exactly opposition Mars in the natal chart of Watt Hamilton.

The correspondence between the charts of the killers reflects passion and a long lasting or growing (sexual) problem that did not seem to move on or solve. In fact, there was a continuous state of anger (Watt) or depression (Kretschmer). And at a certain point, the world was confronted with them and they made victims. Had there been therapy, perhaps this event did not occur. Many others were born on the days of birth of the killers, and they grew up like normal citizens. So genes, hormones, the situation and circumstances were of vital importance and perhaps they could have been helped with the proper therapy before they committed their dramatic and horrifying crime.

PS I found a site with an HOB for Watt Hamilton (ccrsdodona.org)