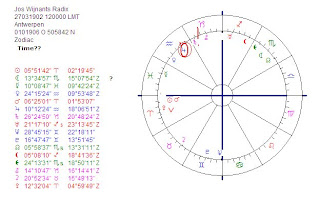 Coming Friday a Dutch man becomes 107 years old. He was born on March 27, 1902 and his grandfather also became very old (92). Genes and circumstances are always very helpfull when it comes to getting old (or not). But...

What kind of a chart does it take to become as old as he is? On my site Astromarkt I pubished an article about some of the helpful signs in the chart. The hour of birth is not available. The chart of the day of birth at noon shows us:

1. He has more placements in air and fire than in earth and water. 40% of his placements are in air signs. See the article on my site Astromarkt for more info.
2. Moon in Scorpio (strong sign for the moon)
3. Sun is sextile Jupiter and 105 degrees from Uranus (Sun with Jupiter and Uranus prolongues life)
4. Saturn does not make any Ptolemaic aspect in sign or orb 5 degrees (as if 'getting old' was his vocation:) - see explanation below -
5. 40% of the placements in movable signs (so that he like to move in a moderate way)
6. No inconjunctions between planets and/or lights. (Inconjunctions often refer to illnesses or disabilities from the start. So they can be missed:)

This, together with the good genes helped him to be able to celebrate his 107th birthday, even though 'getting old is nice, but being old is less'.

He retired 42 years ago, in 1967 with progressed Jupiter trine progressed Pluto and progressed Ceres. Four years ago he moved to a care center, out of his private house and ...learned English again to be able to speak with members of the European parliament. He gave up smoking when he was about 80, after surgery (...) and he still likes a good glass of wine at dinner.

Wijnant was born in Belgium. He was a war refugee in the First World War. His parents sent him to The Netherlands, where he stayed. He travelled a lot and likes tales about strange cultures. Wow, how that corresponds with the meaning of the oriental Jupiter (first outer planet rising before the Sun)!
He has humor and beliefs in heaven and...his daily small portion of alcohol.

SATURN
Saturn is 'calling' when Saturn does not make major aspects in sign or orb 5 degrees. When Saturn is calling the effect of Saturn reaches any level (up or down) and that means that ambition, caution and responsibility is very important in the life of the chart owner. Saturn happens to be the planet of aging, age and time. So the theme of aging, the elderly and time is of great importance. The good thing about Saturn (sometimes...) is that caution, responsibilities and being moderate is rewarded in terms of time.