Famous couples: chart of Carla Bruni and her men

Carla Bruni is the first lady of France. She is first of all an artist and she has a strong personality. She also has 3 indications in her chart for having difficulties with long lasting relationships. See her chart: 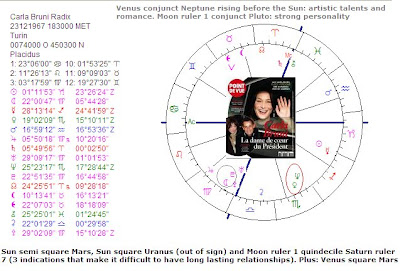 Of course, with these aspects, she didn't marry a John Smith who wanted 4 children and a housewife. She has been spotted with Mick Jagger, for example. There is strong attraction (his Mars - her Sun/Moon), but the inconjunction between their Suns must have caused serious problems. Who's star is shining, ehm? Here you see the charts wrapped around each other. For more about the artistic partnership of Mick Jagger and Keith Richards, see Art&Astrology. 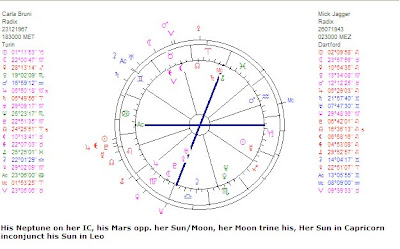 Another lover was Eric Clapton. Her Venus is sesquisquare his Mars and that promisses passion. But it didn't last. Their Suns didn't match, but worse is that their Saturns 'collided'. Perhaps age difference was a problem. Anyway, Saturn square Saturn causes separation in the end. 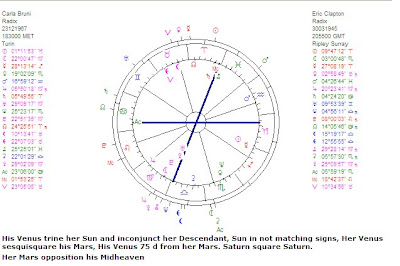 Now Carla Bruni is with Nicolas Sarkozy. They seem to be able to create a modus vivendi for the fact that both draw atttention (Sun semi quintile Sun) but living together in one house might be a problem (Moon qd Moon). His Jupiter on her Ascendant tells us that he will support her. In her presence he feels great:)
This relationship really has a good chance to survice, as it seems at first site. But what is that Uranus - symbol of controversy - on the Ascendant of the combine chart doing? And why is Neptune - for romance and the possibility of desillusion - on the IC of the combine chart? Time will tell...

CONCLUSION
When there are 2 or more indications for divorce in a chart, it won't be easy to find mr. Right. Carla Bruni is sensitive (as an artist) and she has a strong personality. She will easily be disappointed in her romantic ideas about love, with Venus conjunct Neptune in Scorpio. This and her ruler 1 conjunct Pluto could mean that she may want 'all or nothing' in love. Her chart doesn't show a compromise or sitting back and dream away watching romantic movies. She has Sun square Saturn (conjunct Midheaven) and is ambitious, also about partners. Saturn rules her 7th house.

Right now transit Uranus is inconjunct her progressed Ascendant and trine natal Ascendant. Uranus is conjunct the combine chart Ascendant. This transit might activate the combine chart, like a test for the relationship. Perhaps indepence (or upheavel) is an important issue in her relationships with others right now. Rumours say that Sarkozy is impressed by another beauty -Christine Kelly - and that he wants her to become part of his government. Newspapers speak of 'competition' for Bruni.