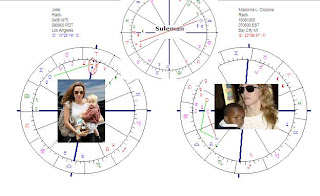 Today I read that Madonna wants another adopted child. And I know that Angelina Jolie has a more than average number of (adopted and natural) children. Time to see what their charts have in common...

Madonna and Angelina Jolie both have the Moon on an angle. That is not surprising, because attraction and the fact that they are female is of crucial importance in their lives. But Moon is also the symbol of educating, caring and being the caretaker (mother). Another thing is that just like mrs. Suleman, the ladies have an aspect between Sun and Jupiter (a sextile) and Moon and Jupiter (conjunction and semi square). The sextile and the conjunction are between 3 and 4 degrees of orb; Jupiter is not connected to the midpoint Sun/Moon.

In old days being fat and/or having many children was considered to be a sign of prosperity and linked to Jupiter. This hasn't changed, apparently. But there is more, besides the Moon and Jupiter.

CERES is conjunct the Ascendant of Madonna. Ceres is conjunct the midpoint Sun/Moon in the chart of Angelina Jolie. And Ceres symbolizes genes, heirdoom, roots...and all that is related to Mother Nature. Click 'Ceres' in the labels below this post to see more examples of the effect of Ceres. Amazing, not, that such a small planet is prominent in the charts of women who are known as a female icon and who apparently want to nurture or show the 'harvest'. (Perhaps Suleman has an angular Ceres?)

More about the astrology charts of Angelina Jolie and Madonna on this blog...