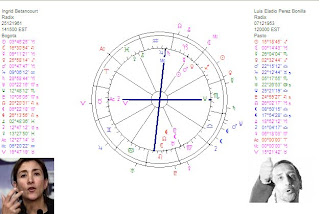 Now that she filed for (her second) divorce, the almost former husband of Ingrid Bétancourt accuses her of 'adultery' with a fellow hostage, Luis Elado Pérez Bonilla, born 7 December 1953 in Pasto. I wonder how, given the circumstances, but I know that Ingrid Bétancourt's (former) best friend Clara Rochas has a child with one of the FARC-members, so there was interactions between the sexes (and it were long years without television:).
Let us have an astrological look at the relationship. Apart from the possible mutual connection between Sun and Moon, they share four combinations of aspects and two of them are activated by transit or progression right now. Often shared experiences make a bound.

1. An important Saturn
Luis's Saturn is the first outer planet rising before the Sun. This 'oriental' Saturn reflects ambition, responsibilities and the manager (all that is related to respect, age and status). Ingrid has a 'calling' Saturn, which is a Saturn without major aspects in sign or orb 5 degrees. Both HAD a status as a politician. And according to the memoires of the American hostages, there was a sort of a hierarchy among the hostages that perhaps separated them from the rest.

2. Saturn-Uranus: being in prison and broken free
Ingrid has Saturn inconjunct Uranus. Luis has Sun square Saturn/Uranus. They were in prison together and there was in fact a limited choice in friends.

3. Mars-Uranus (activated today)
He has the square, she has the trine for sharing an adventure and a fight for freedom.Ingrid has Transit Mars opposition natal Uranus today. Luis has transit Uranus inconjunct Mars today. Both have an 'explosive' nature, too. BTW: there is often simple friendship when Mars-Uranus is involved in relationship (like in communities of men or fighters).

SECOND DIVORCE
It is not the first broken marriage of Bétancourt. Sun conjunct Mars and ruler 1 (Venus) 105 degrees from Pluto (ruler 7) + Neptune on the Descendant are signs of a possible not long lasting marriage. As Ingrid's Uranus is square Perez's Venus I wonder if THIS relationship will be everlasting love. This also because her progressed Sun will be inconjunct his Uranus (and his Uranus is square his Mars) within a year from now.

PLUTO TRANSIT
It is not easy to be a saint or an angle when you are a living person. And it is even more difficult with transit Pluto conjunct Sun (when you live the intense way). Her Pluto is disposing of the 7th house of marriage, so that the problem that comes to the light with Pluto on the Sun is a relational problem.

ROMANCE
Also transit Neptune is conjunct her progressed Venus and Venus-Neptune is the combination for love affairs. Today transit Venus is conjunct progressed Neptune as well, to make it is difficult day with a romantic issue.

READ ALSO:
Astrological background information: About you and him/her having the same combinations of aspects...