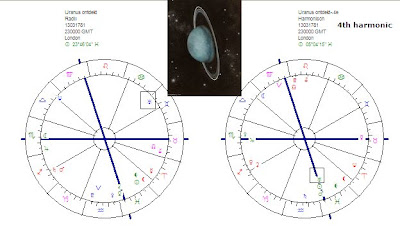 Today 228 years ago Uranus was discovered and this seems to be the chart of the moment. Amazing is that Uranus is not on top at all:) Uranus is square Sun and Mars on 13 March 1781 at 23 hours GMT London. Uranus is not important in this chart at all. It is such a dull chart, so unlike Uranus...

The chart of the moment of discovery has the Moon on the Ascendant and Venus (rising before the Sun) is opposition Midheaven. But Uranus is insignificant in the eight house. That is rather surprising, and that is the nature of Uranus:), LOL. Or is not it? The eight house is supposed to be the house of research and discoveries.

But...I found Uranus opposition the natal Midheaven in the fourth harmonic, conjunct Sun. Perhaps 4th harmonics show crucil events and moments for the most important planets in the chart.