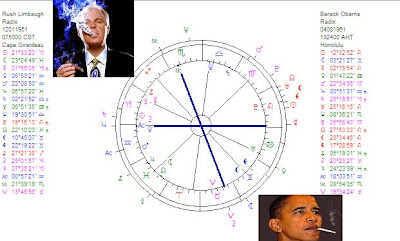 Funny that CNN mentions Rush Limbaugh as Obama's republican opponent...Why? Because he has Sun square Neptune, just like Obama has. It is as if they were meant to fight each other over ideologies. (Or is it 'addictions'? They both are famous smokers!:)

SIMILARITIES
Rush Limbaugh has a prominent Venus for diplomacy on his Ascendant. Neptune is the first outer planet rising before his Sun. Neptune is on top of his chart in his ninth house.

Obama has Venus without Ptolemaic (major) aspects rising before his Sun. Neptune is on top of his chart in the ninth house.

Both are diplomats and hold their ideals high.

SHARING SUN-NEPTUNE
Now what happens when two people are related in the professional field and share Sun-Neptune squares? I wrote this on Astromarkt:

Sun and Neptune shared in aspect gives you shared ideals, dreams and faith or even a shared idol! But with hard aspects you might share the same disillusions as well or this relationship is disappointing. Cooperating could work out best in an asylum or in a non-profit organization where they can help others, and each other.

Another possible combination is between enemies and with Sun in hard aspect with Neptune shared. Ideology stand between you as was the case with the murderer of director Theo van Gogh who shared Sun square Neptune with his victim.

JUPITER AND PLUTO
More surprising is Obama's Jupiter on Limbaugh's Ascendant and Limbaugh's Pluto on Obama's Descendant. I wouldn't know how to interpret this, but the combination of Jupiter and Pluto with the horizon of their joined Ascendants promises great success if they would cooperate or perhaps...fight each other. Maybe they stimulate each other:)

Obama's Jupiter on Limbaugh's Ascendant can be explained. It is Rush's job to lead the fight against Obama. Limbaugh has now progressed Sun conjunct Jupiter so probably this is a promotion and Obama's success influences his situation.

READ ALSO:
The article on Astromarkt about relationships between people with the same kind of aspects in their natal charts....