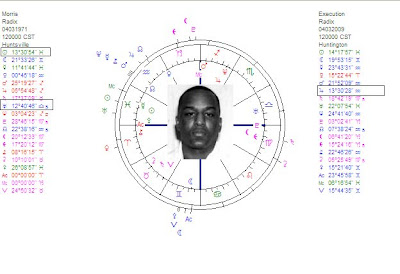 Today a man was executed in Texas. It was on his 38th birthday. So, he was born 4 March 1971. I don't know where and at what hour and in what kind of a neighbourhood or family. But I do know that he had Jupiter exactly trine Uranus and semi sextile Sun when he died. The combination of Jupiter and Uranus is always there when a positive change occurs. Reinhold Ebertin spoke off the 'Thank God combination'. Sometimes death is a relief and perhaps a positive change.

Kenneth Morris was convicted for the murder of a man during a robery at his home. He did it without a reason. He had already been given 1800 dollars. But he had an oriental Mars square Pluto and quintile Uranus. He had quite a difficult chart with 70% in the nervous movable signs. At a certain level we see a busy nervous kind of man who has sudden impulses of agression (using violence). In some occasions and social positions this kind of a chart easily leads to crime. We see the theme of unnatural death in his chart reflected by Pluto 157.5 Mars/Saturn.

Today Morris said he was sorry and ready to go home. That is the effect of a Jupiter trine Uranus.

READ ALSO:
More about Jupiter, Uranus and the relief (even when it means death) ...

Or see this post about Jupiter and Uranus and astrologers...

Jupiter and Uranus seperately but working together for Guus Hiddink...