Charts of the Natalee Holloway case

Nico van den Bos (Astrologie Zeeland) has estimated the birth hours of Natalee Holloway and Joran van der Sloot, using transits and progressions. This is the link to the article (in Dutch).
And here are the guess charts. 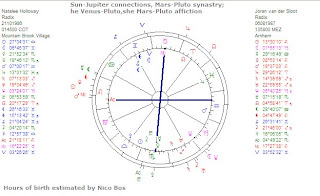 The guess charts inspired me to have another look at the case and the charts of those involved.

MOON-PLUTO
At the estimated hour the position of the Moon in Natalee's chart (inconjunct her Pluto, his Pluto and quindecile his Uranus, quintile his supposed to be Midheaven) seems to be the key to it all. It tells us that Natalee might have been attracted to dangerous males, just like Karen Homolka, who also has Moon inconjunct Pluto. See the article about the Moon-Pluto effect in the charts of Homolka and Bernardo...
In Dutch astrologer Martin Boot’s book ‘Van Ram tot Vissen’ the inconjunction of Moon and Pluto is referred to as ‘seeing submission as a way to express love’.

Natalee’s Moon has some tight aspects. The Moon is inconjunct Pluto, trine Mars and opposition Saturn. The Moon (symbol of the woman and early years) is connected with the combination of unnatural death (Mars, Saturn and Pluto), all in the 7th or 8th degree. Yet, the tighest aspect is Mars square Pluto. I have written about Mars-Pluto on my site Astromarkt and in short: it is about the use and abuse of violence and the drive to win (or having to defend yourself). (There is also a Mars-Pluto connection in the charts of John and Jacqueline Kennedy, BTW).

It is that combination of Moon, Mars, Saturn and Pluto that is in aspect with the Pluto and Uranus of Joran, in the 8th and 23rd degree. For example: her Mars is semi square his Uranus and square his Pluto.
I like to mention that more persons born in Joran’s month have hard aspects with Natalee’s Mars. But…they were not as close as Joran was.

VENUS-MARS-URANUS
On the day of her disappearance she had transit Uranus trine progressed Venus and transit Mars square progressed Uranus. With the used hour of birth, Mars would also be inconjunct her progressed Ascendant. The picture is that of a sexual adventure (Venus, Mars and Uranus) with possibly also disproportional activity or getting hurt.

The solar return chart of her last birthday has Sun square Saturn (so she had Transit Saturn square Sun in the year before her death) and Venus square Pluto. Saturn would be in her 8th solar house that year, with the estimated hour of birth.

4x NEPTUNE for JORAN
While Natalee has an adventure and possible accident (Mars-Uranus) in her chart on the day of her disappearance (31 May 2005), with the data used by Van den Bos, the following day Joran would have:
- progressed Midheaven trine Neptune (1)
- transit Neptune was square his progressed Ascendant (2)
- Neptune was also opposition natal Midheaven (3) That is a lot of Neptune!
- + In the solar return chart for 2005 the natal Sun was opposition …Neptune (4).

(Without hour of birth there is not much in the chart)

He was a suspect right away. But there was no evidence. Neptune is the planet of hidden things, drugs, alcohol, concealing, secrets, fantasies and mist. And Neptune is involved when a person in missing or...when a person is being suspected. So I don't think astrology tells us 'who done it'.

BTW: In 2005 in the progressed chart of Joran van der Sloot Sun, Venus and Mars (in conjunction) changed sign. His life changed. In the tertiary chart (based upon the estimated hour of birth), the Ascendant was conjunct Venus and he was having fun that day. The next day – or in the night - the Moon squared Uranus: shriek!

JUPITER INCONJUNCT SUN
Astrology does tell us that Natalee had a certain tendency to be attracted to the wrong kind of men. And that Joran has the potential to be a great pretender with a lot of energy and strength. Her Jupiter inconjunct his Sun might indicate that she there was no balance in the way that she had confidence in him.

JORAN’s CHART
- His natal chart has an oriental Jupiter, the symbol of travelling and convincing. He was born in The Netherlands, grew up on the Antilles and lived or lives in Thailand now.
- The Mercury square Jupiter tells us that he is communicating a lot (and probably boasting). He also has Mercury biquintile Uranus for creatively changing the facts whenever it is suites him. Mercury is sesquisquare Saturn, too. With three potentials for lying, the risk that he won't tell us the truth is gigantic. We know that he recently won a nice sum of money in a poker game.
- Pluto (symbol of money, force, sexuality, life and death and power) is conjunct the Ascendant. That is often so in the charts of people who are 'protected' in a way. Venus is square Pluto for a desire to earn a lot of money. Venus is sesquisquare Uranus. The combination of Venus, Uranus and Pluto tells us something about radical and impulsive sympathies and affection. And Uranus-Pluto tells us about a possible arrest (Uranus-Pluto) related to women.
- Mars and the Sun are on top in the chart corrected by Van den Bos. The important placements and positions for Sun, Mars, Jupiter and Pluto in the possible chart reflect successes and an enormous drive and energy with the potential of success. If he was born at 13h58, why would he be involved in criminal activities?
- Joran has 60% of his placements in fire signs and that means that he is full of energy, possibly overactive. Mars might be on Midheaven. That means that his acts, energy and drive are of importance for his name and career. But what if they were wrong? Mars is sesquisquare Neptune and that does not mean he is a criminal. Lawyers and judges also have this aspect often. But Mars-Neptune has the potential of doing the wrong thing. The chart of Joran seems to me the chart of a capable liar. And that corresponds with what we know.

MEETING
Anyway, with or without hour of birth, their meeting was full of stress and challenge:

Her Mars is afflicting Pluto in her birth chart (and maybe her Moon is inconjunct Pluto)...
Her Mars squares Joran's Pluto.
And her Venus squares his Mars.

Sometimes such meetings turn into a drama. Venus and Mars added with Mars with Pluto introduce a sexual component as the link between them. Mars with Pluto sometimes refers to using violence or force. We don't know what happened, but we do know there was sexual attraction involved. And that Natalee did not return home.
Would the estimated hour of birth have been hers, I would not have been surprised if her remains were found these days, as in her progressed chart the Midheaven is inconjunct Pluto (a discovery, but…). For the sake of her family, I hope they will find out what happened to her body.

Read also
Moon-Pluto in the Ken and Barbie case

The astrology of meeting people (on my site Astromarkt)

And of course...the labels below