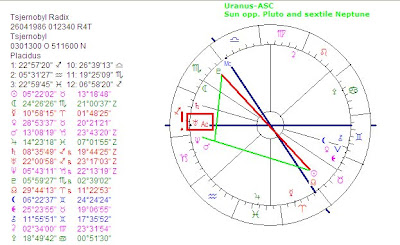 Inspired by a documentary on television I looked for the data of the nuclear disaster of Tsjernobyl to errect the chart. At 1h23m40s was the final error, followed by the explosion. Uranus was on the Ascendant of that moment.

Uranus is almost always there when there is a shocking accident or an explosion. The accident killed thousands of people, many of them gave their life to try to stop the fire. Help came late and the world was not warned. Satellites of the USA discovered that something disastrous was happening.

Click the label 'Uranus' below or 'Accidents' to see more examples of a crucial angular or elevated Uranus in the charts of accidents.