The changes in the chart of Sir Stanford 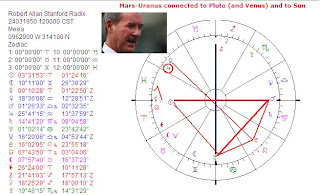 It is not easy to have transit Pluto square Sun and your life changes the hard way. It is even more difficult when your progressed Sun changed sign. That makes two indications for life in a transformational period. It is perhaps harder when you used to be a success, rich and famous. Can life even get better? Possibly it could not. Sir Robert Allen Stanford has been caught and the charge is fraude, with transit Pluto opposition progressed Uranus and 4 transit inconjunctions with the progressed chart. Notice that transit Pluto is in aspect with Sun and progressed Uranus. The combination of Uranus and Pluto reflects a dramatic change.
In Stanford's natal chart the tightest aspect combination is Sun opposition Mars and square Uranus, the same combination as in the chart of the Japanese minister (see earlier post) who had to step back because of inappropiate behaviour. Stanford also has Mars semi square Pluto. Mars, Uranus and Pluto together often produce impatient and impulsive acts and not seldom are related to arrests and sudden and unexpected other kind of changes in life. Stanford has been arrested. For his financial problems, see Venus opposition Pluto.
For more about Venus-Pluto or Mars-Uranus, see my site Astromarkt or click the labels below.