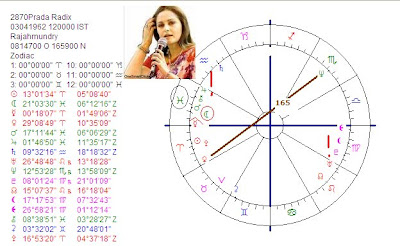 The car of Jaya Prada, leader of the Samajwadi Party in India and Bollywood actress, has been attacked but she escaped unhurt. This happens to her on a hectic day with solar transit opposition Uranus, and with Venus and Mars both inconjunct her Pluto. That is reflecting disproportional (inconjunction) passions (Venus and Mars) in politics (Pluto). The lucky escape is shown by transit Jupiter conjunct Saturn (an advantage going together with a disadvantage) and by the solar transit trine progressed Venus.

What in her chart shows the actrice and the politician? As her hour of birth is unknown, we will have to use the chart of the day of her birth (April 3, 1962) and see if there is any important placement or aspect. This is what you see:

Mercury is on Aries Point, reflecting the importance of communications

Moon rises before the Sun, for emotions and senses first

Venus is quindecile Neptune to show the focus on artistic talents

Venus is 'rushing into Taurus' (in the final degrees of Aries). Taurus is a good sign for artists

Jupiter does not make major aspects in sign or orb 5 degrees. A 'calling' Jupiter tells us that there will be development and successes and that travelling around is important

Pluto does not make major aspects in sign or orb 5 degrees. A 'calling' Pluto tells us about the importance of money, sex, power, influence, danger and politics.

The combination of Jupiter and Pluto promisses great success. Beauty helps (she has Venus trine Uranus).

Any person born on April 3 1962 has this promissing profile, but it depends on where you were born and how you were raised, too. The profilel will be stronger when there are important angular placements and/or when the midpoints Sun/Moon or Ascendant/MC confirm what has been found in the chart of the day of birth. For your information: Jaya Prada was born in a middle class family. Her father was a film financier and her mother thought her how to dance. When she was 14 years old she performed a dance at school and was 'discovered'. That was with progressed Sun trine Uranus and progressed Mercury conjunct Venus.