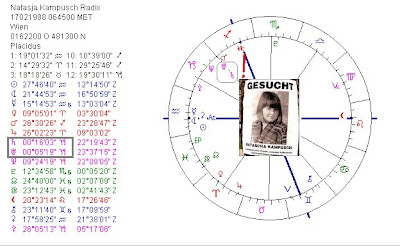 The Austrian police announced that they are investigating links to child pornography in the NATASCHA KAMPUSCH CASE. Natascha vanished when she was only 10, was being held in a cellar for years and managed to escape on August 23, 2006. Reading her chart and that of her abductor, I noticed a very strange pattern:

What I observed was (in a shortlist)that a man:

The theme of limited freedom linked their charts (his Saturn/Uranus square her Ascendant, her Saturn/Uranus biquintile his Sun). And when she broke free she had a good moment to break free (trine Saturn-Uranus) and HIS life changed in a dramatic way (with transit Pluto inconjunct Sun).
So the situation was reversed. What comes around, goes around...

Sometimes astrology makes you think... If you want to read the whole story, here it is and here are their natal charts. I don't know the HOB of Priklopil.

Natascha Kampusch was born at 6:45 a.m. in Austria on 17th February 1988 with Moon on the Ascendant (attraction) and an angular Mercury, planet of communications. After the end of her imprisonment, she had her own talk show. This important Mercury is semi square Saturn and Uranus so that communicatins and contacts were rigidly limited. But Saturn and Uranus also have the potential for breaking free...

SATURN-URANUS and the limtiations of freedom
In her chart Saturn and Uranus are prominent. They are connected to Zero Aries. Also, they do not make any major aspect in sign. I name planets in such conditions ´calling planets´.
Saturn and Uranus dispose of 60% of her planets, as most are in Aquarius or Capricorn.
The prominence of Saturn and Uranus in her natal chart shows how important the theme of limited freedom was and still is, in her life.

MARS AND PLUTO for use and abuse of force and influence
There are 13 midpoint combinations with Mars and Pluto, connection the limited freedom to use and abuse of violence. Pluto is on top of this chart, reflecting the importance of cases of life and death, sexuality, money and/or influence and politics. Mars and Pluto are semi square. Fortunately, Mars is also conjunct Jupiter. The combination of Mars, Jupiter and Pluto stimulates energy and self defense and is one of the combinations in charts that indicate successes.

ABDUCTED
On the day of her abduction (2nd March 1998) transit Pluto was square progressed Sun. That certainly transformed her life! As she has many potential in her chart for intelligence, charm and patience, she managed to survice.

WOLFGANG PRIKLOPIL
Her abductor, Wolfgang Priklopil, was born 14th May 1962 in Hainburg a.d. Donau. With Moon in Virgo and Venus in Gemini he prefers women young. There is a quindecile aspect between Saturn and Uranus (for being obsessed with limited freedom...and later for finding a creative way to prevent being in prison himself: suicide).

When he committed suicide transit Pluto was inconjunct Sun, Uranus conjunct progressed Jupiter and Venus conjunct Venus. There is a quindecile aspect between Saturn and Uranus for a creative way out... 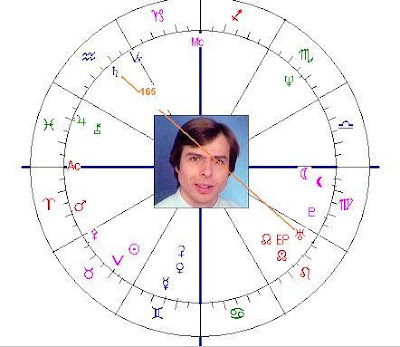