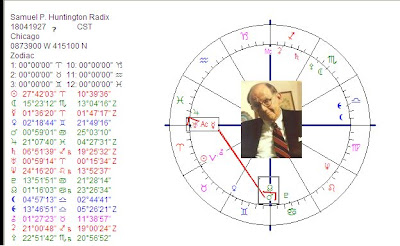 Samuel P. Huntington, the man of the theory of the clash between cultures in the future, died today. In the chart of the day that he was born, you clearly see the controversial or new ideas being promoted (Mercury-Uranus square Mars, all three related to Aries Point). The combination of Mercury and Mars relates to discussions. Mars and Uranus, in aspect with Mercury, might cause overheated and explosive disputes. On April 18, 1927 there was a picture of energetic thought provoking debates in the sky. Huntington was a political scientist.

I suppose that Pluto will have an important place in his individual chart. But also the Moon in Scorpio (ruled by Pluto) symbolizes the need to have a strategy or a defense. His first important work was about soldier and state. And his last was a sort of a warning for possible conflicts in the future.
Geplaatst door Astromarkt op 11:12 PM