Astrology chart Robert Pattinson (no HOB) and the transit of Jupiter 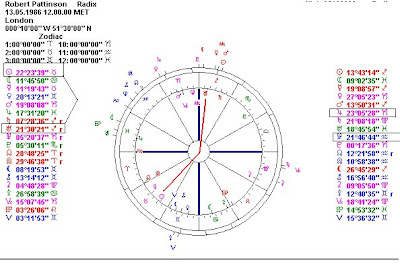 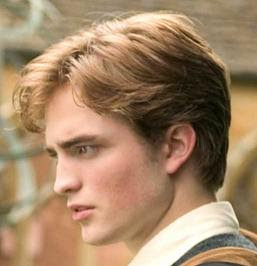 A fortunate transit of Jupiter trine Sun goes together with the international release of 'Twilight' with the starring role for Robert Pattinson. There are less fortunate moments for a release...

TRANSITS
Transit Jupiter trine Sun, transit Neptunus square Sun: It is the combination for having fans at the moment. Robert Pattinson (Twilight), born in London on May 13, 1986, meets crowds of screaming girls wherever he goes.

But, because Jupiter's trine is first and Neptune's square follows there is the possibility of negative press or a dissapointment ahead. Maybe the present excitement and chears are just too much to be true?

NATAL
In his natal chart there is already a potential for having an audience or public:
- Jupiter is quintile Neptune,
- Sun sextile Jupiter and sesquisquare Neptune.
And Venus opposition Uranus and quindecile (165 d) Neptune refers to being an artist and to music, too. The sense of art is also reflected by the position of Sun in Taurus and Moon in Cancer (a good sign for anyone who needs to 'pretend' or 'act').

MORE OBSERVATIONS
- Jupiter is the oriental (first rising important planet) in his chart. That refers to international affairs, travelling and publications. The trine coming from Jupiter know activates the existing potential in the natal chart.

- Saturn is the 'calling' planet*) in this chart. That makes you think of business. Saturn is the planet for managers, too. Well, who knows what is next?

- Pattinson is active as an actor and as a musician. This multiple activity might be contributed to the position of Venus in Gemini (a double sign).

- Just like Daniel Craig, Robert Pattinson does not seem to be the 'usual guy'. Both have a difficult distance between Sun and Uranus (Craig a quindecile, Pattinson an inconjunction). Remember the controversy about Craig being James Bond?

If you are interested in what connects the charts of artists, then go to my new blog Art & Astrology.


*) a calling planet is a planet that does not make major aspects in sign or 5 degrees orb.
Geplaatst door Astromarkt op 1:00 PM