Soon it will be January 1, 00:00 all over the world, but as the Sun moves over the meridians and the New Year will start where the Sun rises first, there will be different charts of New Year. Here you find some of those charts (for Washington, New Delhi, Peking, Rabat, Reykjavik, Caracas), something about the meaning of the charts and some historical New Year's charts (Berlin, London and Warsaw). If angular positions in the New Year's chart have a meaning, than there it will be an important year for Iceland, Venezuela and Morocco. Those are the countries with an angular placement at the moment of the most important midnight of the year. 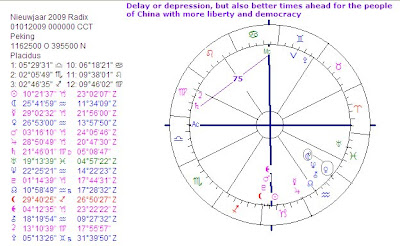 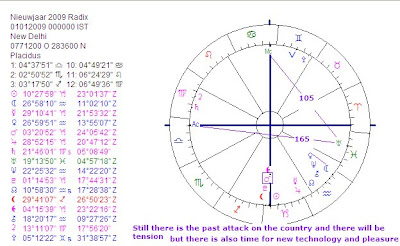 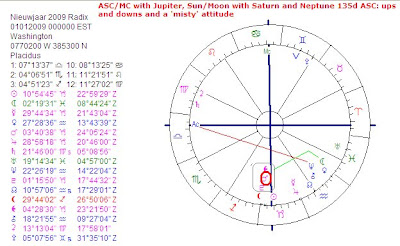 Mars and Pluto were square in the radix of 2002, semi sextile in the radix of 2003, sesquisquare in 2006, opposition in 2007 and sesquisquare again in 2010. In 2009 the conjunction of Mars and Pluto will be more or less close to the meridian, depending of the place on earth. And the Moon will be in Aquarius (in Asia and Europe) or in Pisces (in the America's). The different Midheavens and Ascendants and the different position of the Moon make a difference in perception. I will show this with the charts of Caracas, Rabat, New Delhi, Washington, and Reykjavik. Does this chart of a place and moment in time mean a thing, I wondered? So I searched in history and found interesting charts of New Year's Day 1945 in Berlin and London and of the New Year in Warsaw, Poland, in the year 1939. You see them when you scroll down. These chart have significant positions on the angles. So I guess that angular positions are the most important in this chart. And I know that they are important in natal charts, too. 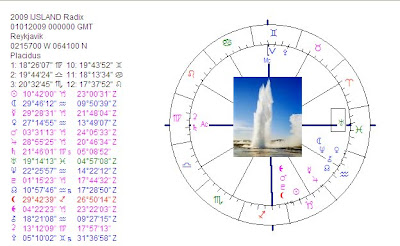 In Reykjavik (capital of Island) Uranus is opposition the Ascendant when the New Year starts. Uranus is the symbol of independence and of 'unions'. Iceland wants to join Europe now that the country is almost bankrupt. Iceland is also the country of eruptions (geysers) and as it happens Uranus is the planet of shocks and explosions. 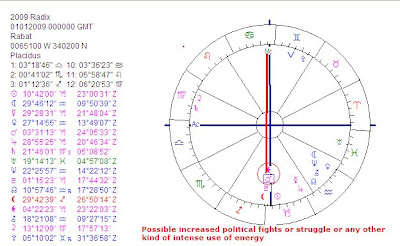 Just like in the chart of Rabat, the chart of Caracas has Mars opposition Midheaven. In Rabat it could be related to an attack, accident or...just firework. But they have to be alert for fire. Caracas also has Uranus sesquisquare ASC and Uranus related to ASC/MC. It looks like the chart of a revolution or sudden unexpected struggle. Perhaps the electricity just stops working. 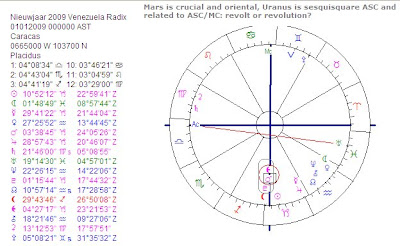 MOON IN THE FIFTH
When the Moon is in the fifth house there is a need to show off and perform and in Aquarius new technologies might be demonstrated in 2009.

In Asia, and in particular in India, the Moon will be tightly conjunct Venus in the 5th house of fortune and that could be fortunate for women and children or for the improvement of human rights. In China this conjunction will perfect later that night. In the Eastern part of the USA (including New York and Washington) however, the Moon has past Aquarius and will be in Pisces when the clock strikes 12 and the firework starts.

DOES THE New Year’s CHART MEAN A THING?
Here are the charts of January 1, 1945 in Berlin and in London. 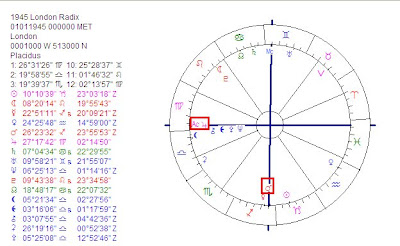 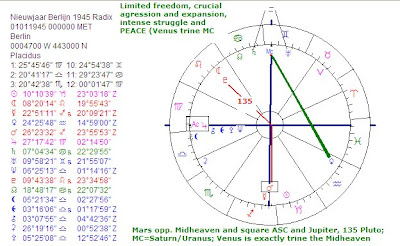 The differences are clear. It could be just coincidence, of course. But there is clearly victory (Mars + Jupiter = successes in wartime) in the chart of London. And the tightest aspect in Berlin is the planet of peace, Venus, trine the Midheaven, with a Midheaven exactly in the middle of Saturn and Uranus, symbolizing restricted freedom (occupation). And this is the chart of the Polish capital in 1939, the year that Germany invaded the country: 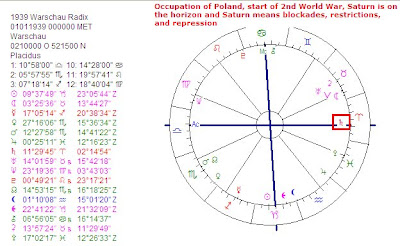 It is not likely that a single New Year's chart alone is reflecting the complete year ahead. It is just one of the general signs, and of course it takes more. Try it for yourself and you will see that looking back is easier than you think:). I will have a look back at this post in December 2009 (I hope:).
I wish you all a pleasant year ending and a good start of 2009 with Sun, Venus and Jupiter on the angles!
Geplaatst door Astromarkt op 6:58 PM