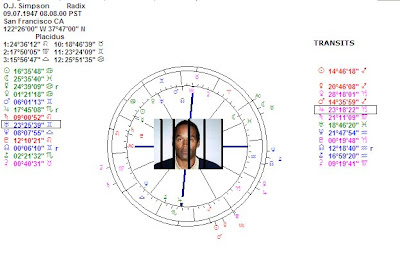 O.J. Simpson has been sentenced and given 33 years in prison. He won't be free before 2017. But it could have been worse. He could have gotten life. Maybe that is why on the day of the verdict transit Jupiter is inconjunct Uranus. The combination Jupiter-Uranus is usually an indication for a relief. An inconjunction however reflects misbalance and misplaced feelings or events. Jupiter inconjunct Uranus could be read like this: a relief, but (or one with another side of the story...) And that 'but' is that he will be in jail for long.

SUN-SATURN = Uranus/Pluto
It is rather classical in astrology that a Sun-Saturn conflict related to a placement in the 12th house reflects the risk of imprisonment. The Sun-Saturn conflict in the chart of Simpson measures 22.5 degrees. The half semi square is maybe not the usual kind of conflict and a minor aspect, but in the 22.5 degree midpoint range Sun and Saturn are part of the same midpoint combinations. Sun is conjunct and Saturn is 22.5 degrees away from the midpoint of arrests: Uranus/Pluto (sudden and revolutionary bad change in life). In his solar return for this year, Saturn is on a crucial spot at the bottom of the chart. Mostly that tells us that a person's status is not improving in the year to come...

The chart of O.J. Simpson seems to be a harmonious one at first sight, looking at the major aspects. But there is that chart behind the first impression. For more about that part of Simpson's chart, read my previous post.

For more about the 22.5 degree aspect, click on the label below this post.
Geplaatst door Astromarkt op 1:42 PM