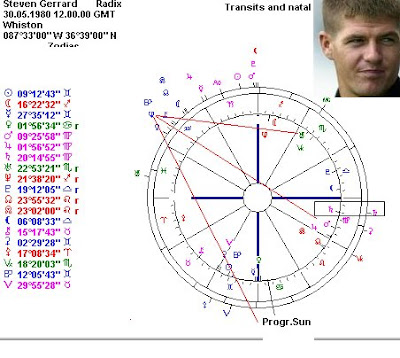 Steven Gerrard, football player and Member of the Order of the British Empire, has been arrested (and released on bail) on December 28, charged with taken part in violent assault and affray in a bar fight (that badly injured a man's face).
There are a few important and significant clues in the positions at the day of his birth and in the transits and progressions that I like to show you. It is about:

Most of the above mentioned combinations have been mentioned before on this blog and the frequent visitor will immediately recognize the patterns of 'short temper', 'disadvantage of age/responsibilities', 'being seen in a negative light' and 'arrest, sudden dramatic change'.

SUN-MARS-URANUS
On Gerrard's birthday Aries Point was opposition Mars/Pluto, Sun was tightly square Mars and Mars was biquintile Uranus. Sport is one of the ways to deal with or use an overload of agression and energy. With Sun square Mars life is strongly related to using energy, being active and sometimes aggressive ('me first', to score and get things done). With Mars biquintile Uranus means: a creative (quintile) way to explode. See the article on Astromarkt.

SATURN-SATURN, coming of age
We see Transit Saturn conjunct progressed Saturn (facing facts of life, the disadvantage of age, status). When a person has to face limitations, responsibilities and debts or guilt there is always a Saturn-Saturn combination. We all have such a combination at age 30 and age 60, when we become adults or aged and when time suddenly starts counting.

NEPTUNE-SUN, suspected...
Negative (Neptune) spotlight (Sun), that is often the combination of Sun and Neptune and only if you are lucky enough to have the transitting or progressed trine you might experience being worshippoed (and that is in fact another way to be seen as others want you to see at a certain moment in time).

Transit Neptune is sesquisquare the Progressed Sun in his chart and inconjunct progressed Mars. Begin a suspect is one of the possible meanings of Neptune - Sun transits (see the post about missing persons and the persons involved, scroll down for the link). Neptune is also square his natal Uranus (as the progressed Sun is afflicting Uranus in the year to come).

Bad times don't show up with only one transit or progression to accompany them. Gerrard has a combination of bad times or timing (Saturn-Saturn), being in a negative spotlight (Neptune-Sun) and negative action (Neptune-Mars) with unespected drama (Uranus-Pluto) linked his name to assault. The progressed aspect of Sun with Uranus probably will cause more upheavel and hectic times later in 2009.

Posts about Sun and Neptune
http://astropost.blogspot.com/2008/12/effect-of-sun-neptune-combinatons.html