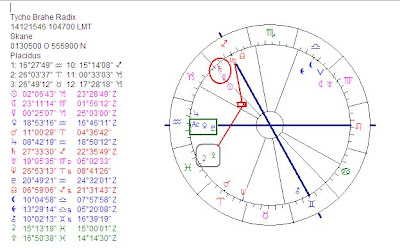 Tycho Brahe was an astronomer. He also was an astrologer. It is easy to see how both sides are united in his professional career:

1. Sagittarius Midheaven, ruled by Jupiter in Aquarius, disposed by Uranus in Virgo, disposed by

2. Mercury in Capricorn and Capricorn ruled by Saturn in Sagittarius.

You see the Jupiter-Uranus connection that is indispensable in the charts of astrologers and astronauts and frequent in the charts of modern popes. It is the combination of having a view at things that go beyond earthly matters and matter. This combination is confirmed by Jupiter in connection with Sun/Uranus. Uranus symbolizes a lot and for example the extra terrestial, since Uranus is the first planet that is not visible from earth. In the days of Brahe Uranus had not been discovered yet.

You also see Mercury and Saturn involved. Mercury and Saturn are rising before the Sun of Tycho Brahe. It is the combination of science (respected knowledge) and the oriental placement symbolizes that Brahe was first of all a scientist.

CERES AND PALLAS (Patterns of resources)
Ceres and Pallas are recent additions to the astrologer's vocabulary. And both are strongly related to the Midheaven and conjunct. Ceres is the planet of resources (nutrition, nurturing mother, alma mater, seed) and Pallas is the symbol of patterns. Brahe was searching the sky and Brahe was practising alchemy to find patterns in the basics and origins of life.

FAME: SATURN CONJUNCT MERCURY
In 1572 he found a super nova in Cassiopeia and became famous in the world of astronomy. That was with Progressed Saturn conjunct Mercury! You see the strong scientific symbol that was oriental in his natal chart, in conjunction in progression, announcing the start of a scientific career with status.

LEAVING DENMARK: CHANGING MC AFTER PROGRESSED CONJUNCTION OF SUN AND PLUTO
In 1597 he had conflicts with the new king and the church and left Denmark for Prague when his progressed Midheaven changed sign to Aquarius. In the progressed chart Pluto had become the oriental planet, since in 1596 there was a progressed conjunction of Sun and Pluto (for a life changing challenge).

THE SCAR: PROGRESSED ASCENDANT CONJUNCT MARS
Try and see for yourself how amazingly accurate this chart is. The progressed chart of the days around Christmas in 1566 is conjunct his natal Mars. Mars symbolizes injuries and scars. In those days a fellow student hit his nose in a duel in the dark. For the rest of his life he tried to hide the scar with artificial means. Venus and Pluto with the Ascendant could of course symbolize extreme vanity:)
Geplaatst door Astromarkt op 9:02 PM