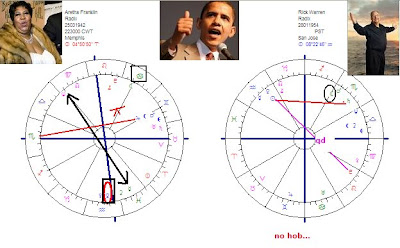 Aretha Franklin is going to sing on Inauguration Day, with Neptune opposition Midheaven, just like in her solar return chart (for the birthday in 2008), IF she was born at 22h30...Strange, as Neptune usually means deception and disappointment or false notes. But Neptune IS disposing of her 5th house (the house of creativity and performance). And she did it before, didn't she?
So let us hope for the best. Maybe the Neptunic influence means that she decided this to be her final performance before retiring.

THE ARTIST IN THE CHART
In the natal chart of Aretha Mercury and Neptune are in mutual reception, disposing of the Midheaven. Venus is opposition midheaven and the oriental planet in this chart. Venus is in Aquarius, square Uranus (and Saturn). We see artistic communications (Mercury and Neptune), strongly related to art and sense of rhythm. *)But there is also Jupiter inconjunct the Ascendant and that should warn her against growing too much in horizontal direction.

RICK WARREN
Another person who will be part of Inauguration Day is the controversial preacher Rick Warren (born January 28, 1954 in San José California) who has Sun and Venus afflicted by a square from Saturn and a quindecile from Pluto for having strong and restricted antipathies and sympathies. There is a lot of commotion about this man doing the prayers because of his ideas about homosexuality. And as he has 70% in fixed signs, most in Scorpio and Aquarius he is not likely to change his mind just like that!

In an earlier post I mentioned that the tight inconjunction between Saturn and Uranus in the chart of Obama might reflect 'desperately hanging on to old concepts' (as AstrologyWeekly said).
This in spite of the changes that Obama keeps mentioning and that makes you think of something NEW. On Inauguration Day however, we will see a legendary soul singer (most famous in the 60's, the years of JFK) and a very conservative preacher highlighting the event. It makes me think of old concepts, back to the Sixties, again. But let us see what else there will be on the day of Obama's inauguration...

*)More patterns of artistic talents on my blog Art&Astrology

PS Aretha Franklin was not happy with her performance on Inauguration Day and blamed it to the freezing cold...